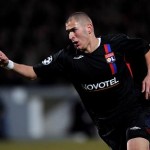 Sir Alex Ferguson may announce the fourth striker who will join the squad after Newcastle game today. Fergie who looked stressed as he is only operating with Carlos Tevez during last two games with inexperienced Fraizer Campbell on the bench, is looking to add a fourth skillful striker to add more strength and challenge to United front.

It is most likely that the striker will be Dimitar Berbatov. The report suggested yesterday that the Bulgarian striker has hand in a transfer request to open the way to his move away from the White Hart Lane with either Manchester United or Barcelona to be his next destination.

But Sir Alex remains silent over the name of the new striker as Berbatov may prefer to go to Spain rather than staying in England. So the other alternatives names may be the same as report suggested in summer Huntelaar, Benzema and David Villa. As Real Madrid shows their interest to sign Dutch striker Huntelaar and Valencia won’t listen to offers for Villa to solve their finance crisis. Karim Benzema may be the striker Manchester United are looking for. He is only 20 years old, Fergie likes young players, he is the type of player playing inside the box and scoring goal. He also can play in the Champions League unlike other targets such as Thierry Henry who played against Wis?a Kraków.

Do you think Benzema will move to United or the striker will be Berbatov?