Manchester United lost to Liverpool for the first time since April 2004 and has thrown a three top in the race to retain the English premier league crown. Now Liverpool went top of the table thanks to Van der Sar mistake and Ryan Babel who scored the winner in the second half after caming off the bench. 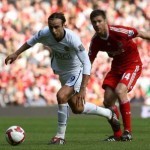 With Dimitar Berbatov, making his debut, Sir Alex Ferguson has gambled as he played with 4-3-3 system which saw Rooney and Tevez playing upfront too. The new system could only work for the first 15 minutes. Carlos Tevez has given the Red Devils an early lead in the 3rd minute when Berbatov held off Carragher and passed the ball to Tevez who calmly put the ball past Reina.

Liverpool was given a gifted goal when Van der Sar tried to put Xabi Alonso cross away. He blocked the ball but unlucky Brown was on his way and the ball rebounded into United goal.

In the second half, Liverpool has put United under pressure and they were winning everything in the middle of the pitch. Giggs replaced Carrick who injured his ankle again which means the player is unlikely to face Villareal this Wednsday in the UEFA Champions League.

Our players were not in their day and the second blow in the game was just before one minutes of the end as Vidic saw the red card after crashing his arm into Alonso’s face. He will now miss the visit to Chelsea on September 21. United efforts to equalize went through the air.

Now Sir Alex Ferguson has to wait for Ronaldo comeback. It is likely Ronaldo is going to take part during Villareal this Wednsday. In my opinion, Fergie should play 4-4-2 and keep one of the strikers on the bench. The question rise is Ryan Giggs the player we know in the last five years, of course not! I think Ronaldo comeback will solve United problems… HOPEFULLY