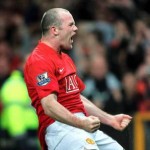 Wayne Rooney continues his perfect form with Man United and England by helping the red devils with a massive victory against West Brom at Old Trafford. United trashed Baggies with four goals and Rooney took part in each goal with two assistances and one goal. United are now in the top four with a game in hands and If they keep wining this way, United could see themselves top of the Premiership very soon.

Sir Alex Ferguson started the game without Scholes, Hargreaves and Carrick. Tevez also was left out of the squad. However, Fergie gave the chance to the promising right-back, Rafael da Silva, to start the game.

The first half ended with a goalless draw. West Brom started the game playing fast football. They didn’t allow United to play their attacking style. Rooney scored a goal but it was denied as it was appeared that Rooney pushed Gianni Zuiverloon to one side as he skipped onto Ronaldo’s through ball.

In the second half, United have put West Brom under heavy pressure. Rooney cut in from the left flank and sent a driven effort past Carson from just inside the West Brom box.

Then Rooney turned provider as he dissected the Baggies defence to play Ronaldo through on goal. Cristiano collected the ball calmly before slotting home past Carson.

Two minutes later, Ryan Giggs passed the ball to Nani from a corner. His cross into the area went through defenders legs and straight to Berbatov who has an easy finish to score his first Premeir League goal for United.

Before the full time, from a lightning quick counter-attack Berbatov played the ball to Rooney on the right. The England international slided an inch-perfect pass behind the West Brom defence and Nani finished with his left foot, beating Carson at the near post.