Will David Silva join us on January?

Valencia C.F David Silva has been linked with Scouser this summer, but the press suggests that the 23 years old Spanish international winger would prefer Manchester United to Liverpool.

Valencia C.F David Silva has been linked with Scouser this summer, but the press suggests that the 23 years old Spanish international winger would prefer Manchester United to Liverpool.

Sir Alex Ferguson has been tracking David Silva, who also can play as attacking midfielder, and is reported to have sent scouts to watch the Euro 2008 winner this season.

Silva couldn’t hide his pleasure to be linked with Manchester United and playing in the Premier League, he told the Daily Mirror: ‘It’s an honour for any player that a club of the prestige of Manchester United should follow them and that in itself is enormous praise.

‘I am committed to Valencia and my dream is to win the title but in the future anything is possible.

‘Valencia have rejected offers for me in the past few months and I am happy here. But I also know that the Premier League is a big competition and hard to resist.’

So, the future can be next season or maybe this January, who knows!  So far, the player has played 6 games with scoring one goal which was during Valencia last game against Valladolid. I watched the game highlights, Silva showed great skills when talking about dribbling, crossing and assisting team-mates to score goals.

I believe David Silva will be a great and a useful addition to Manchester United squad. He has self-confidence with fast acceleration, response and good vision. As Antonio Valencia still trying to settle with the team and Nani is looking to reach his potential, Silva will solve this problem and add more competition for places in the middle. 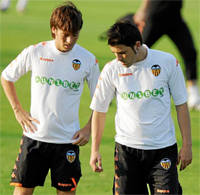 If you watched last Valencia game in the La Liga, you would notice the goal machine, David Villa, who scored two goals to add them to the other two he scored in the last 6 games. His scoring ability remained me of Ruud van Nistelrooy. Add to that, He can score from free kicks and outside the box! And he is better than the £30million Bulgarian striker Berbatov who’s until this moment couldn’t justify his price tag! SHOULD UNITED THEM GET DAVD and DAVID?! I really would like see this to happen.

Would you like to see David Silva with Man United? And what about Villa?