Chelsea reclaimed pole position in the Premier League title race with a 2-1 victory over Manchester United at Old Trafford. Sir Alex Ferguson will feel hard done by as substitute Didier Drogba was clearly offside when he collected Salomon Kalou’s pass and drove home 12 minutes from time. The significance of the error only became clear once Federico Macheda had pulled a goal back for the Reds to set up a pulsating finish. 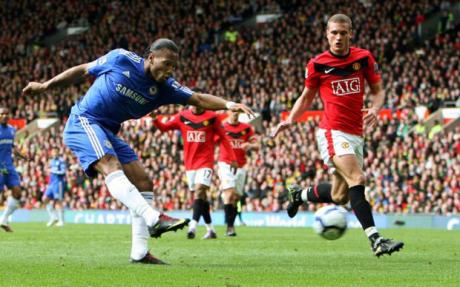 Chelsea reclaimed pole position in the Premier League title race with a 2-1 victory over Manchester United at Old Trafford. Sir Alex Ferguson will feel hard done by as substitute Didier Drogba was clearly offside when he collected Salomon Kalou’s pass and drove home 12 minutes from time. The significance of the error only became clear once Federico Macheda had pulled a goal back for the Reds to set up a pulsating finish.

But Ferguson would be aware that the first hour had been completely one sided in Chelsea’s favour and that the visitors should have had a greater advantage than the one goal Joe Cole provided in the first half. Without Wayne Rooney, there was no real bite in United’s attack. And although the 34 goal striker is only out for a fortnight, by the time he returns his side’s dreams of glory might be over.

Having put his side’s obvious failings in possession down to a one off in Munich last week, Ferguson must have been worried to see the same fault reappearing quite so often, quite so soon. There is no doubt the ankle injury Rooney suffered in Germany had a negative effect on United.

The aftermath of those 90 minutes in Munich was there for all to see as a leg weary United were unable to dictate anything in midfield. There was a distinct feeling when Chelsea suffered a knock out blow by Inter Milan in the Champions League that it was a defeat which could transpire to give the Blues an edge in the title race. That advantage was clearly evident in this performance.

But the fault lay much deeper, United were too ponderous to have any impact. All across the midfield, they were wasteful in possession. And with Florent Malouda giving Gary Neville a right old runaround, Chelsea took complete command. Edwin van der Sar denied Cole on one occasion and Nicolas Anelka had a couple of shots blocked but clear cut chances were rare. Even Chelsea’s opening goal was not a golden opportunity in that sense.

Malouda was invited to run into the home box and although Darren Fletcher eventually reacted, the Chelsea midfielder had the strength to hold him off and cut the ball back to the near post where Cole got in front of Patrice Evra and found the net with a neat back flick.

It took United a long time to respond. And when the rally eventually came, it took the form of a couple of debatable penalty appeals. Referee Mike Dean was also not impressed when Yury Zhirkov chopped down Park Ji-sung and Dimitar Berbatov fell under Frank Lampard’s challenge.

The introduction of  Drogba midway through the second half emphasised the Blues’ strength in depth compared to United who were forced to rely on the talents of teenager Macheda when Ferguson needed to reinvigorate his side. Predictably, Drogba had an immediate impact even if he was offside as he collected Kalou’s pass before drilling his shot past Van der Sar.

Down and almost out, United responded instantly as Cech pushed Nani’s cross onto the onrushing Macheda. The ball bounced slowly into the Chelsea goal to set up a dramatic finish. Despite a clear superiority over the whole 90 minutes, Chelsea in the end was forced to rely on a linesman’s blatantly incorrect off side decision to grab the points which may prove so decisive when the finishing line is reached. Before then however both sides still have five tricky matches to maneuver and with third placed Arsenal breathing down their necks this race is far from over.