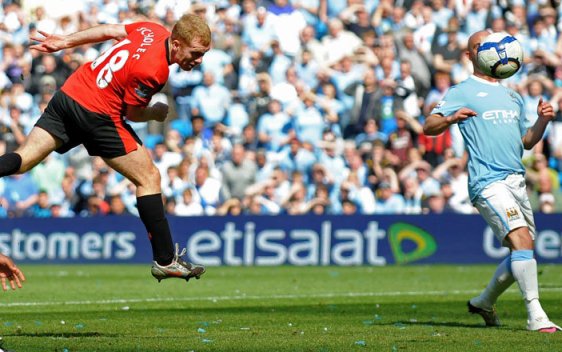 A Paul Scholes header in the third minute of stoppage time handed Manchester United a precious 1-0 victory over fierce rivals Manchester City at Eastlands. The veteran midfielder marked the signing of his one year contract extension with the 149th goal of his glittering United career to keep the title race well and truly alive.

The win reduces the gap at the top to just a single point, although Chelsea could increase that back to four with victory over Tottenham later on Saturday. In a game starved of clear-cut chances which United had the better of, Scholesarrived on cue with the last play of the game to meet Patrice Evra’s cross and nestle a firm header into the bottom corner.

City had chances themselves to snatch the spoils in the second half with both Craig  Bellamy and Wayne Bridge coming close in the latter stages. After his appearance against Bayern Munich 10 days ago, it was hardly a surprise that Wayne Rooney should declare himself fit after just a single day’s training.

But the prospective PFA player of the year looked ill at ease, repeated rants at referee Martin Atkinson and a petulant kick at Nigel de Jong belied his mood. Rooney appeared tentative, he declined to set up Ryan Giggs when he had the chance to do so, and there was no real conviction behind his only decent opportunity of the opening period, when Antonio Valencia forced the ball into the area.

Having beaten Kolo Toure with a deft piece of skill, the goal opened up for striker, who had scored 34 times before his unfortunate ankle injury. He dragged the effort wide though, which only increased his frustration, his contribution eventually brought to an end 15 minutes from time when he was replaced by Dimitar Berbatov.

Rooney’s attack on De Jong might have been revenge for a thunderous challenge from the Dutchman on Evra, which set the tone for an opening period high on energy but low on goalmouth incident. A bulldog of a midfielder, De Jong gave United little time to settle on the ball, and though the visitors had plenty of possession, much of their passing was of a sideways variety.

Only Valencia looked as though he could cause the Blues significant problems. Having escaped a penalty box handball that went unseen by Atkinson and apparently, the entire United team, returning full-back Bridge was undone by the Ecuador man just before the break. Valencia squeezed a cross through to the near post where Giggs was alert enough to make contact, but lacked the power to beat Shay Given with a low flick.

For their part, City seemed to have more movement but invariably ran into a defensive brick wall. Against his old club, Carlos Tevez curled an early free kick towards the top corner only for Edwin van der Sar to make an excellent save.

It turned out to be the sum total of first-half efforts on goal from Roberto Mancini’s men, a fizzing low cross from Bellamy not much to enthuse about considering his team had scored 11 times in their last two outings.

The was no discernable improvement – either in the overall quality or Rooney’s temper – in the opening minutes of the second-half. It did Rooney no credit at all that when he was kicked by Vincent Kompany, he rolled around in apparent agony then jumped to his feet and ran off without a problem once the yellow card had been brandished.

The problem for United was that with their bulwark at less than full throttle and Valencia their only source of pace, they were reliant on guile alone to open up the defence. City had more speed and a flowing move, started by Emmanuel Adebayor and inevitably involving Tevez, ended when Bellamy crashed a shot into the side netting.

Shortly afterwards, the Blues had a penalty appeal turned down. Gareth Barry could be accused of making too much of minimal contact by Gary Neville. There was certainly contact though, and not with the ball on Neville’s part.

The crowd were still digesting that incident when Giggs got on the end of a long ball beyond the City defence and would have been clean through if he had not been confronted immediately by Given, whose goal was threatened by Berbatov with a deft header shortly afterwards.

It then took the interventions of Nemanja Vidic and Darren Fletcher to ensure a goalmouth scramble caused by Van der Sar’s ill advised charge to meet a cross did not ended in disaster for the visitors. This flurry of activity gave the impression of a game finally heading somewhere. It took Scholes to find the net right at the death.