Life for a footballer in the 60s and 70s was as different as chalk and cheese when compared to the extravagant lifestyles of today’s multi millionaires – so much for the Good Old Days as far as they’re concerned! The Sunday Times ran a series of articles recently which illustrates how the world has changed for players from the two eras. Football legends who were able to bring the World Cup to England 44 years ago were ordinary, simple guys just like us back then instead of  overly pampered stars surrounded by bodyguards, living with WAGS in stately mansions.

The mentality of  football fans has also been forced to adapt accordingly. Many Dads cannot afford to take  their children to watch their idols. An autograph is often no longer a highly cherished possession but simply a sought after item which can be sold on ebay for the sake of making a few pounds. Even the traditional 3 o’clock Saturday afternoon kick off is slowly disappearing in favor of television friendly lunchtime, Sunday evening or Monday night fixtures.

So what was life like for elite players when England last captured the biggest prize in football?

Schooldays – The England team in 1966 and 1970 was made up mainly of players who had left school at 15, many having already signed with professional clubs. Others had already started working as apprentices, in trades that they might return to once their playing days were over. The modern English game has yet to produce footballers who might moonlight as rocket scientists, but Frank Lampard has an IQ of more than 150 — which puts him in the top 0.1% of the population. At the private Brentwood School in Essex, he passed 12 GCSEs and got an A-star in Latin. 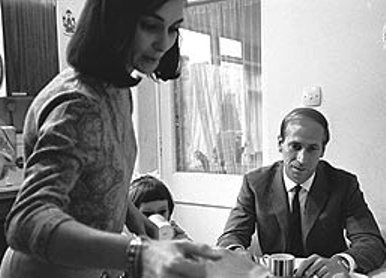 After the final whistle – Premier League footballers routinely spend thousands at nightclubs and restaurants but players in the 60s and ‘70s lived far more modestly. Alan Mullery, who captained Tottenham and made 35 appearances for England, spent Saturday nights at the Malden Tavern, a pub-restaurant in suburban Surrey where he lived quietly with his wife and children.

As a younger player with Fulham, Mullery and his team mates would drink at the club’s own bar. ‘The lads sometimes would not leave the ground until 9.30pm’ he recalls ‘we would drink half pints of beer or shandy’. Players are now most likely to mix in celebrity circles but in the 60s their social lives were less glamorous. ‘We mixed with the public, played with the public, travelled on the train with the public’ says Mullery ‘they’d sometimes have a pint with us too.’

Now teenagers get lucrative contracts and signing on fees. Wayne Rooney was 18 when he signed a contract with Manchester United reportedly worth £50,000 a week. England stars are now paid £1,500 each for every international appearance, although since 2007 they have donated their match fees to charity.

Away fixtures – Few players in the 1960s went on holidays abroad. Tottenham Hotspur’s Cyril Knowles, of the song Nice One Cyril, spent his summers working in the fish and chip shop he part owned in Pudsey. By the 1970s, players such as Martin Peters and Steve Perryman had ventured as far as the Algarve and Rimini. In 1975 Rodney Marsh went all the way to Corfu.

The trend for beach holidays endures only now footballers own the beach or at least, the luxury villa next to it. Players such as David Beckham, Gary Neville and Joe Cole invested in Dubai’s exclusive Palm Jumeirah resort. Cole went 1-0 up on his England team mates in 2008 when he sold his villa for a £2.5m profit — just before the credit crunch halved their value.

Suited and booted – Footballers have always been fashion conscious. Johnny Haynes, England’s first £100 a week player, was a Brylcreem boy decades before Beckham slicked his hair back and George Best’s flowing locks saw him dubbed ‘the fifth Beatle’. In the mid 60s, along with Manchester City’s Mike Summerbee, Best set up boutiques and others followed. Bobby Moore even had a go at designing clothes. According to Rodney Marsh, his drinking partner, George Best ‘seldom wore jeans, he’d wear casual pants or trousers and a leather jacket.’