He’s the treble winning legend who always played with a smile on his face, the goal scoring machine who was loved by every Manchester United fan. Yet there he was at 38 years of age, playing against Everton in front of 40,000 fans, thousands of miles away in far away Sydney. Yes, Dwight Yorke still has that ever present mischievous grin and is still doing the business years after his days at Old Trafford came to an end.

Liverpool Echo journalist Greg O’Keeffe, down under to report on Everton’s pre season tour wrote “Evertonians watching their side’s first pre season friendly in Sydney can be forgiven for not recognising many of the opposition line up. But the beaming grin on one player in sky blue at least will be unmistakable.

Yorke was a flamboyant goalscorer who earned widespread respect during his Premier League years and led a high profile life off the pitch. But he left a good impression down under after his switch to Sydney FC for the A-League’s inaugural season in 2006. He only played one season with Sydney but proved immensely popular.

Making a one off appearance against the Toffees, Yorke used the ball intelligently from a deep midfield role and had Sydney holding their own and providing useful opposition. Everton’s Diniyar Bilyaletdinov will certainly not recall being tackled by the former Manchester United man fondly. 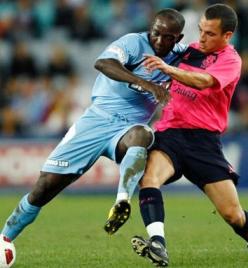 The treble winner lasted 60 minutes before Sydney’s Czech coach Vitezslav Lavicka replaced him. It was a good performance, full of clever passing and cross field balls which proved why he was able to finish his career in the premier league with Sunderland. Even at his age Yorke is still in good shape. His presence on the pitch at the ANZ Stadium helped to make the rugby league loving residents of this city switch their attention to the round ball game.

The newly titled Trinidad & Tobago ambassador for sport had not long landed in Australia from the UK and had spent most of the last month as a media pundit in South Africa. As usual, he was all smiles saying that “It’s always exciting to play against a big Premier League team when you’ve retired from the game, and obviously it’s good to catch up with some old faces. I’ve managed to do all right against Everton throughout my career. My record’s not so bad, and it’s a team I’ve always respected.”

Yorke was happy to see former Old Trafford teammate Phil Neville again “With Phil what you see is what you get. He wears his heart on his sleeve and he gives you everything” he said “it doesn’t surprise me to hear how popular he is. He’s really well liked among the players and fans and he’s had a great career. He’s a pleasant person with a lovely family.”

Whether it was the appearance of Yorke or the visit of Everton, a meaningless training game featuring two sides both preparing for their new seasons, with limited media coverage in the week leading up to the World Cup Final and exorbitant ticket prices, still drew an attendance of 40,500 which was more than Liverpool could attract for some of their Europa League matches at Anfield and not far short of Manchester City’s average Premier League gates last season. A fact that should raise a few eyebrows.

What are your fondest Old Trafford memories of Dwight Yorke?