Warning… Genuine title contenders do not take a 2-1 lead six minutes from the final whistle, be awarded a penalty moments later and still not take all three points as Manchester United failed to do at Craven Cottage. It’s not something that Sir Alex Ferguson’s sides are renowned for doing but with a whole season ahead of them, the bitter lesson will hopefully sink in before the stakes become even higher. That said, Fulham would have had every right to feel hard done by had they not taken something out of this game. Apart from netting his 150th career goal for the club, Paul Scholes was once again widely acknowledged to have been United’s best performer.

Contrary to previous seasons, Truly Reds will be presenting summaries linked to the most reliable media outlets for those who may want to read the complete match reports. 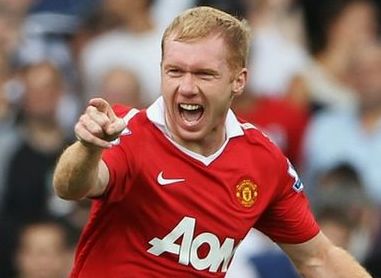 BBC Sport – Brede Hangeland made amends for an own goal with a late header to rescue a point for Fulham and spoil Manchester United’s 100% start to the season. Paul Scholes’ 25 yard drive put United ahead but Simon Davies’ 12 yard finish deservedly drew the home side level. Hangeland diverted a corner into his own net to give the lead to United, for whom Nani saw a penalty saved by David Stockdale minutes later. Hangeland rose to head in from a corner to give his side a share of the spoils.

It was the least Fulham deserved for their contribution to a match that had seen them denied possession for large periods but give as good as they got against in form opponents. Dropping two points, even though early in the season, is a blow to United, with reigning champions and title rivals Chelsea having hit six goals for the second successive game on Saturday to leave them as the only side with maximum points – Full Report

The Independent – Brede Hangeland headed a last-minute equaliser to deny Manchester United victory in a gripping Barclays Premier League clash at Craven Cottage. United appeared to be heading for victory when Hangeland scored an unfortunate own goal with seven minutes go – the first act of a breathless climax. Nani missed a penalty moments later that would have put Sir Alex Ferguson’s side 3-1 up after Damien Duff handled in the area. And United were punished for Nani’s wastefulness in the final twist as Hangeland atoned for his earlier blunder by powering a header past Edwin van der Sar.

It was a thrilling way for Mark Hughes to mark his first home match as Fulham manager while Ferguson will know his side deserved no more than a point. Word filtered through shortly before kick-off that Ferguson would continue refusing to conduct interviews with the BBC.  Ferguson was today expected to end his boycott of speaking to the corporation, which dates back to 2004 amid pressure from the Premier League and League Managers Association – Full Report

Sky Sports – Brede Hangeland scored in both ends late on as Fulham twice came from behind to earn a 2-2 draw with Manchester United at Craven Cottage. United piled the pressure on the hosts early on and didn’t have long to wait for an opener as veteran Paul Scholes gave them the lead with a trademark strike on 11 minutes. It was the in form midfielder’s 150th goal for the club and followed his man of the match display against Newcastle. Substitute Nani then had a penalty saved by Fulham keeper David Stockdale after Damien Duff accidentally handled inside the area in a frantic end to an entertaining game.

The save proved vital as Hangeland made amends for his error in the 89th minute when he rose highest from a Duff corner and powered home a header to square up the sides once more. It was a thrilling way for Mark Hughes to mark his first home match as Fulham manager while Sir Alex Ferguson will know his side deserved no more than a point. Ferguson would have been delighted by United’s formidable start with a dashing early run from Antonio Valencia caught the eye only for Scholes, the intended recipient of his back heel, to stumble on the ball –  Full Report

Do you consider an away point to be a good result for United?