Four 6-0 defeats in just 20 Premier League matches! So what’s going on? Could there have been such a yawning gap created between the top and bottom of the league? Manchester United could have easily made it five 6-0 scorelines had they taken even half the hatful of chances that went begging in the 3-0 defeat of Newcastle in their opening game. Yet the newly promoted Magpies came back themselves to inflict a six goal hammering of Aston Villa a few days later.

Season 1999-2000 produced 2.8 goals per game which is the highest in the history of the Premier League while the 64 scored in the first two weekends of the new campaign had an average of 3.2. This will undoubtedly be reduced as the season develops but it will be interesting to see how long fans can get this unusually high entertainment value for.

Manchester United has long had a reputation of being amongst the highest goal scoring clubs in the country and still hold the record for the biggest ever win. It came in the 9-0 routing of Ipswich Town at Old Trafford on March 4, 1995 in which Andy Cole hit the back of the net no less than 5 times. That was a Premier League record in itself at the time even though it was later equaled by Newcastle’s Alan Shearer against Sheffield Wednesday in September 1999 and Jermain Defoe against Wigan Athletic in November 2009. 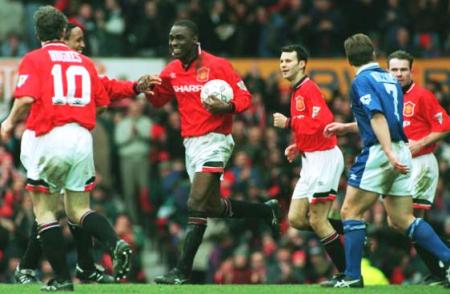 In many ways it was relieving to see a Mark Hughes drive crash against the crossbar, a sparkling Paul Ince effort cleared off the line and several other goal-bound shots and headers blocked by Craig Forrest, a hard-working Ipswich goalkeeper. Had any of those missed opportunities found a way into the Ipswich net,  Manchester United would have emerged from a remarkable Old Trafford afternoon with a perfect10. And it is impossible to find fault with perfection.

A magnificent haul of nine was still good enough in the eyes of United’s delighted manager Alex Ferguson to warrant the use of such superlatives. This was the club’s biggest victory for over a century. Tactically, in the context of a private duel for supremacy with Blackburn Rovers’ Kenny Dalglish,  Ferguson was correct in sending threatening messages to the rival camp, but the nagging feeling as this richly entertaining spectacle unfolded was that Ipswich were devaluing United’s brilliance by refusing to offer even token resistance.

Relegated already in the eyes of many experts, Ipswich appeared to pin their hopes on frustrating United and on snatching a solitary goal like the one which brought them a shock victory at Liverpool in the first month of George Burley’s short managerial reign. 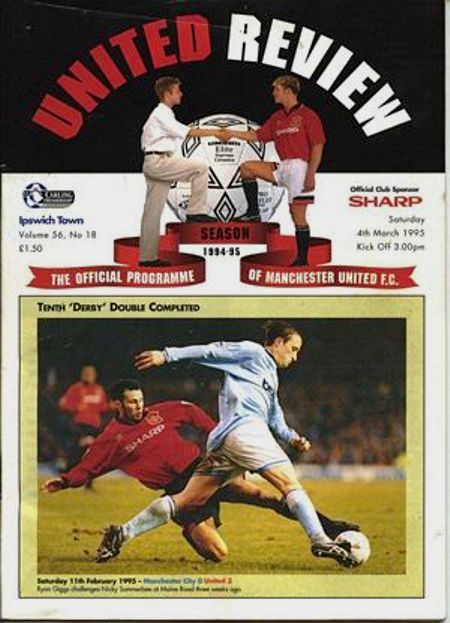 That plan was scuppered inside 20 minutes as Andy Cole plundered the first of his five goals to supplement a well-taken opener by Roy Keane. Two behind against a team who had surrendered only three home league goals all season convinced Ipswich’s experienced line-up that there was no way back, and what followed was probably the most lamentable display ever seen in the Premiership.

The striker was whacked on the ankle by David Linighan in scoring his  second goal eight minutes before the interval after another spectacular Hughes volley had rocked the bar, but he vigorously contested Ferguson’s suggestion that he should not come out for the second half with the points already secure.

“I sensed a hat-trick was there for the taking and I was determined to get one” he said not believing that he would go on to amass his biggest haul in what has been an explosive career. Most of a captivated crowd of 43,804 – by one click of the turnstiles the biggest gate in the country this season – were unsure that the hat trick had been completed eight minutes into the second half.

The scoreboard operator decided that Denis Irwin’s cross had been bundled across the line by the man who left Newcastle in dramatic circumstances in January, but the consensus at the time was that Frank Yallop had inadvertently diverted the ball over his own line. Cole was insistent that it was his goal, and television pictures indicated that he will keep it when any commission meets to adjudicate.

There was no doubt about his next strike, United’s seventh, which wiped out a deficit on Blackburn in terms of goal difference and may ultimately decide the destiny of the title. Cole showed typical penalty box alertness to score on the rebound after Brian McClair’s initial shot had been well saved by Forrest. By then the indefatigable Hughes had scored two goals, which were scant reward for his contribution to the slaughter – a precise angled drive and an opportunist header after Ryan Giggs’s intention of adding a solo spectacular had been thwarted.

The eighth goal would have created an outcry in any well balanced contest but there was no more than a collective shrug of the shoulders from Ipswich after Paul Ince’s chip from a quick free-kick was allowed to stand as Forrest was being cautioned by the referee for handball outside the penalty area.

Fittingly Cole rounded off the rout with the type of goal which helped him to forge his formidable reputation. Facing the wrong way when Gary Pallister’s downward header arrived at his feet on the six yard line, he swivelled like a ballet dancer to deliver the coup de grace.

Will Manchester United ever better a 9-0 scoreline in the Premier League?