Three successive man of the match performances by veteran midfielder Paul Scholes have caught the attention of France legend Zinedine Zidane. Scholes has made a sizzling start to the new season turning on man of the match displays for Manchester United in the 3-1 defeat of Chelsea in the Community Shield, Newcastle and then Fulham in the Premier League. England manager Fabio Capello is understood to still want the midfield maestro included in his  squad.

“It’s only natural to want to select your best players and there is no doubt for me that Paul Scholes is still in a class of his own” said Zidane “he’s almost untouchable in what he does. I never tire of watching him play. You rarely come across the complete footballer, but Scholes is as close to it as you can get.”

“One of my regrets is that the opportunity to play alongside him never presented itself during my career” lamented the Frenchman “he was an extremely tough opponent to play against. You didn’t get any time on the ball when he was around because he would close you down and make your life terribly uncomfortable. He is the type of player you want on your side not in opposition because he could do so much damage. He is very gifted. He makes the game look easy because he has so much natural ability.” 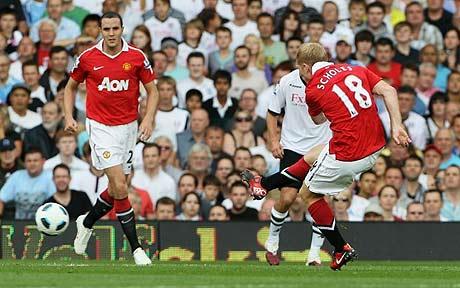 Reports suggest Capello will speak to Scholes one final time to clarify his thoughts on England but it’s highly doubtful that he would be able to get the veteran to change his mind. While Scholes has hinted that he has some regrets at rejecting the call to join the England World Cup campaign, he’s also of the opinion that the reason he’s still playing so well at this late stage of his career is the fact that he retired from international duty at the right time.

Manchester United manager Sir Alex Ferguson certainly hopes that Scholes will not be tempted by any advances made by Capello. Ferguson knows that the only way he can get the best out of his 35 year old veteran in the long season ahead is to handle him with kid gloves and will not welcome the possibility of his star man being faced with any additional  international distractions.

Did Scholes make the right decision in not going to South Africa?