Promising Manchester United ‘play anywhere’ Tom Cleverley has insisted England have their pick of a bright bunch of talented youngsters saying that the talent is in place to replace the old guard. The 20 year old Bradford raised utility player has received a huge boost after Sir Alex Ferguson declared he wasn’t releasing him on loan again following successive stays at Leicester City and Watford. The manager is prepared to give Cleverley every chance of staking a claim for a place in the senior side.

Cleverley continued his impressive displays from pre season with a star turn in the 3-1 second string victory against Manchester City. After lifting Watford’s Player of the Year award while on loan last term and making the breakthrough into the England under 21 side he has now targeted cementing his place in Ferguson’s plans.

He told MUTV that “All I can do is keep playing to my top performance level, whether it’s for the Reserves or the first team. As long as I keep doing that, hopefully the manager will see I’m doing well and I’ll get a couple of chances here and there. Any game against City is a big one but in our squad tonight I think we had six internationals and six under 21 internationals or something silly like that so there was added pressure there.”

“It was one of the strongest reserve teams ever. We didn’t start badly then they got the goal and we lost our momentum a little bit. But we got one in the first half, kicked on in the second, got a couple of good goals, and it’s a good victory.” Ferguson’s decision to keep the youngster at Old Trafford rather than send him out on another loan spell was a huge vote of confidence in Cleverley. 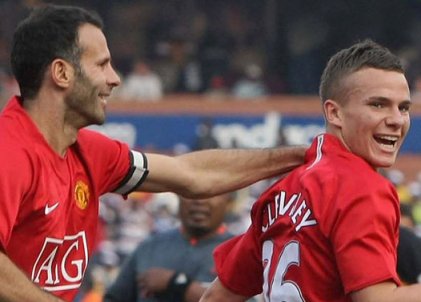 “There are advantages and disadvantages to going on loan” he believes “I would have got more games somewhere else but training with this quality of players every day is a huge advantage. I do feel that one game at United is worth five somewhere else” Cleverley continued “Federico Macheda is an example. He has had a limited number of games but he has done well and made a name for himself.”

While a number of pundits has little faith in England’s future at international level, the confident youngster begs to differ “People are a bit harsh to say there is no talent coming through” he says “it is there, a couple of times we have had the problem the first team has and we just didn’t gel.”

“When you look at players like Theo Walcott, Danny Welbeck, Jack Rodwell and Jack Wilshere the talent in the squad is unbelievable” he continued “a few of those lads have played Champions League and European football. They also have plenty of Premier League games under their belts. The fact Wilshere is in the senior squad just shows it can be done.”

Ferguson has no doubts about Cleverley’s value to his side saying that “He is an exceptional young player in the sense of his ability to play in different positions. He can play wide on either side and in central midfield. He has also showed at Watford last year that he has got outstanding qualities as far as goal scoring is concerned.”  United are fortunate to have a wealth of young talent waiting for their chance to burst through the ranks and it will not surprise to see Cleverley doing just that this season.

Is Cleverley better off staying at United or going out on another loan spell?