Did it really have to come to this? Why should a quasi military operation be required for a highly anticipated European Champions League cup tie at Old Trafford? Stringent security measures will be put in place for Rangers fans travelling to the game because violence marred their last visit to Manchester for the Uefa Cup final against Zenit St Petersburg at Eastlands in May 2008. This time, the Scottish team’s fans will be forced to meet at Wigan Athletic’s DW Stadium before boarding official coaches to Old Trafford.

Officials from United and Rangers are due to discuss arrangements for the Group C encounter on September 14 at a Uefa security workshop in Vienna on Wednesday. Rangers have been allocated 4,700 tickets for the match and the club has said only travel club members can apply. They will have to travel on official coaches, which will only stop at Wigan Athletic’s ground for “catering and rest facilities” on the journey to Manchester.

“Tickets for the match will be allocated by a club official during the coach transfer from Wigan to Old Trafford” Rangers advised fans in an official statement “Tickets will only be issued to the named recipient and will not be issued to anyone under the influence of alcohol.” These arrangements will mean that those who wish to attend the game will have to co operate with the herding plan before being taken the 16 miles to Old Trafford in a convoy of buses with a police escort. 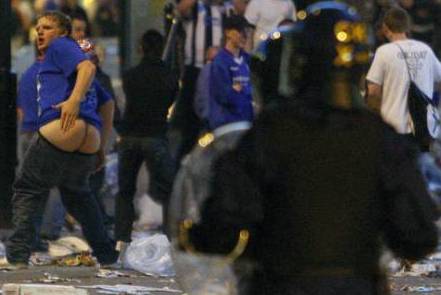 The plan is to ensure as few Rangers fans as possible visit the city centre where as many as 150,000 fans descended in 2008. Police fear that an element of United support will seek revenge for their behaviour of in those incidents. It is expected that tight security measures will also be in place when United travel to Glasgow for the return fixture.

Authorities have revealed that they are also aware of disturbing internet chatter among United supporters who remain antagonistic towards Rangers because of a perception that the violence in 2008 led to the cancellation of a homecoming parade following United’s Champions League final victory against Chelsea in Moscow seven days later.

It all seems like the city of Manchester is being forced to waste a huge amount of resources for the sake of less than 5000 tickets which have been allocated to away fans. It makes one wonder if the whole exercise is worthwhile or if the wiser move would have been to simply deny Ranger fans access to the game altogether.

Would you be happy to ban away supporters even if United fans will then be banned in Glasgow?