Sunday’s Old Trafford clash will be far more than a battle for three points. Manchester United and Liverpool will both be desperate to avoid defeat albeit for vastly different reasons. Anything but a win for United will almost certainly see them trailing Chelsea by seven points after only five games which would be a huge gap to make up so early in the campaign.

For many Liverpool fans however, the objective is totally different. Manager Roy Hodgson has admitted that it’s not realistic for his side to win the title. Even grabbing a top four position could be difficult with both Manchester City and Spurs looking good bets to finish above them. The major goal for those fans therefore is to simply stop United from winning a record breaking nineteenth title. Winning on Sunday will be a huge first step towards avoiding what would be such a devastating outcome.

Facing Liverpool – “I sound like a parrot but this is THE fixture. There is no question about that, it doesn’t change. The form fluctuates quite a bit but we won the last game so hopefully that turns it back towards us again. Sunday is a big game. The disappointment of last Saturday at Everton has to resonate with the players. They can’t make mistakes like that again.

We have to analyse what we think is the best formation to play. We have some players in very good form at the moment and that makes it easy for me. Liverpool rested players on Thursday so it doesn’t really matter, both teams will be well prepared for the game. We’re looking forward to it.” 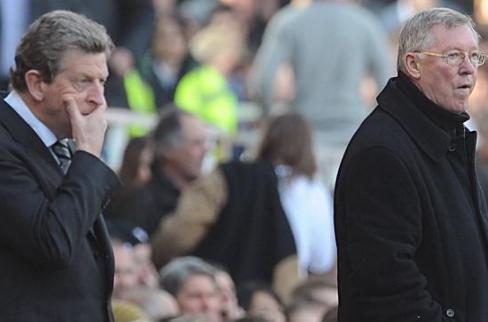 His friend Roy Hodgson – “I have known him for a long time, I first met him in 1987 when I went on an aborted trip to Malmo. It was a European tie against Ajax and they abandoned it after one minute. He was at the game and we went for dinner afterwards. Roy has the experience. He has gathered a wealth of experience in Italy, Switzerland and Finland and the job he did at Fulham was absolutely extraordinary. But our approach will not change. We have to express ourselves the way we always do.”

His feud with Rafa Benitez – “I’ve never been personal, you have to examine Benitez not me. I’ve always enjoyed a good relationship with the Liverpool managers and both clubs have always addressed the situation properly after games. That changed under the last regime but it’s not a big issue for me. In the last regime they spent a lot of money on players, far more than Manchester United did. They had a huge squad of players so I don’t know if the financial position is anything to do with it.”

Horrific injury of Antonio Valencia – “You can never be 100% accurate in these situations and it is a bad injury but we are looking at the end of February. The operation has been successful and the break was clean which was the major concern for us at the time. He is a strong boy who is very positive about it. Being positive helps you in these situations so we are very hopeful we will get him back.

Antonio had a great season last year. He was a great signing for us. He is a young player who has been improving all the time. It is a blow losing good players but in the context of the kind of squad we have, we should be able to cope with it. You always fear when you have a good player out of your team it is going to be a loss. But having players like Nani, Ryan Giggs and Park Ji-sung plus Gabriel Obertan and Bebe means we have options.

There is a mental part to it, take the example of Alan Smith. When Alan got his bad injury in that cup tie against Liverpool he was so positive. He sat in that treatment room at Anfield so nonchalant and relaxed about it. Yet you look at his ankle and think ‘God Almighty’. That attitude definitely helped him.”

Home draw against Rangers – “We played with great commitment and a good intensity, the players all worked their socks off  but Rangers went back to their penalty box.  That’s what they did and it was successful.  They have a formula for playing away from home that’s successful. You have to give them credit, their system of playing was very difficult to break down.

All the attempts were from outside the box, from Darron Gibson, and there was one half chance for Darren Fletcher in the second half. Our first corner was after about 70 minutes. You have to give credit to Rangers – they’ve done their job well. I always say you need 10 points to qualify for the Champions League knockout stage and obviously our home record over the years has been very good. Tonight, that was a blemish. We have a target, we need nine points now from five games.”

Dimitar Berbatov critics  – “Not everyone has questioned Dimitar, he has a lot of admirers particularly at this club. But when we buy a player for a lot of money there is more focus on him. If they have an odd bad game there is a criticism which other players may not get. He worried about it himself however as I told him, he has to dismiss the press. Dimitar has had some terrific games for us. He is enjoying his football and he will play on Sunday.”

Will Liverpool stop United from winning the 19th title this season?