Up until Liverpool met Merseyside neighbors Everton in the tragic 1989 Hillsborough FA Cup Final, the most emotional event ever held at Wembley Stadium was without doubt the Manchester United clash with Bolton Wanderers in the 1958 Final – for very obvious reasons. Greg Struthers of The Sunday Times remembered the occasion fifty years later.

Up until Liverpool met Merseyside neighbors Everton in the tragic 1989 Hillsborough FA Cup Final, the most emotional event ever held at Wembley Stadium was without doubt the Manchester United clash with Bolton Wanderers in the 1958 Final – for very obvious reasons. Greg Struthers of The Sunday Times remembered the occasion fifty years later. 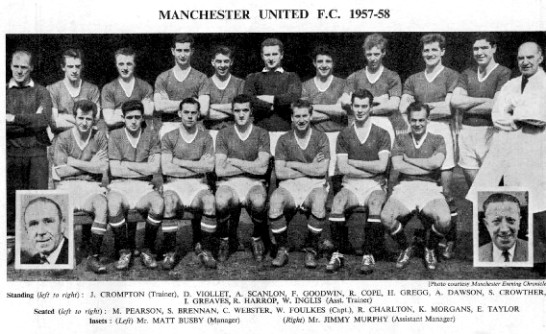 The Bolton Wanderers footballers were on their way from Hendon Hall Hotel to Wembley stadium, a short coach journey through northwest London. It was going to be an emotional afternoon. Only 86 days earlier, the British European Airways charter flight 609 from Belgrade to Manchester had crashed in the snow at Munich, killing eight of the Manchester United side affectionately known as the Busby Babes. 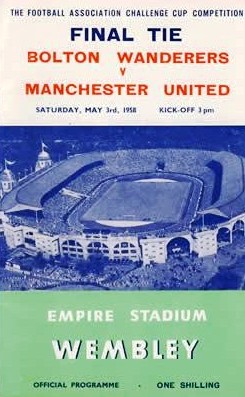 Amazingly, United were now Bolton’s opponents in the FA Cup final on Saturday, May 3. Thoughts in the team coach turned to those missing and such was the sense of loss that several Wanderers players cried on the way to the game.

Many of the 100,000 fans had come to remember the lost and to honour those who had stepped into their boots. United were riding on a wave of emotion, having captured the affection of the nation. Virtually the entire county was behind them, willing them to win the cup for the Babes.

United’s assistant manager Jimmy Murphy had kept the flag flying after the crash had put his boss Matt Busby on a life support system. Murphy cobbled together a team for the fifth round against Sheffield Wednesday only 13 days after the tragedy. The FA allowed him to field “cup-tied” players and he signed Ernie Taylor from Blackpool to add experience to the combination of reserves and juniors.

David Meek, a young sportswriter on the Manchester Evening News at the time, watched United’s remarkable run. “The big issue was whether they would resign from the FA Cup or maybe didn’t have the heart to carry on,” he says. “When it became apparent that the club was not going to go under, it appealed to the nation and people felt they were supporting the underdog. The cup lit up their imagination.”

Bolton had been in awe of the Busby Babes. Two weeks before the Munich accident, they lost 7-2 to United in a league match at Old Trafford. Roy Hartle, a young defender on the end of the trouncing, remembers them fondly. “They were on another waveband” he says. “They were so talented. Most sides have three or four talented players, they had many more.” United’s Ernie Taylor was seen as the danger and Bryan Edwards was instructed to mark him out of the game. Taylor had helped Blackpool beat Wanderers 4-3 in the 1953 final, so he was no stranger. 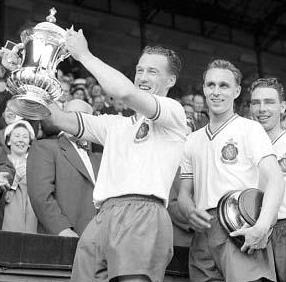 Bolton’s players, on their coach, watched the supporters approaching Wembley and felt the emotion. “There were tears shed on the coach,” says Hartle, “and that included me. It was extremely difficult.” Busby rose from his hospital bed in Munich and turned up to watch, receiving a moving applause.

Within three minutes of the kick-off though, the United script began to unravel. Bolton’s robust centre-forward Nat Lofthouse ploughed through their defence to open the score. Then, in the 55th minute, Bolton were awarded a goal when Lofthouse shoulder charged goalkeeper Harry Gregg into his own net. Bolton had dominated a scrappy game winning 2-0.

“The final was a match too far,” says Meek. “United had run out of emotional steam. Bolton were very determined. They had their own agenda. The other teams were caught up in the Munich emotion but they were grittier. They were another local club and maybe felt under the shadow. They were not going to do what everybody expected, to bend the knee and lose. It’s like a family. Brothers can be harsher on each other than others.”

Celebrating was not easy for the Bolton players, who realised they had spoilt the party. For the second time in the 1950s, they had reached the final only to find that 90% of the country was shouting for the opposition. In 1953, the nation was behind Blackpool and popular Stanley Matthews in what was his last chance to earn a winner’s medal. He did.

This time there was a muted celebration. “We were doing the lap of honour,” says Hartle “and Tommy Banks, who played full back with me  said, ‘Shall we go?’  I replied  ‘We might as well. This is not a happy thing to be doing’. We were in the course of going off the pitch when Bert Sproston, our trainer said, ‘C’mon lads, this is a trip of a lifetime’. He convinced us to complete the lap of honour.”