Sir Alex Ferguson brought Manchester United to the Mestalla and got precisely what he wanted. Make no mistake about it, this United formation was designed to avoid defeat and be on the lookout to snatch a winner. And despite Valencia dominating possession throughout the game, late substitutes Federico Macheda and Javier Hernandez combined to do just that five minutes from the end. As he has done so many times in Europe over the years, Sir Alex got his tactics exactly right.

Having leaked seven goals in their last three Premiership matches, Ferguson ensured that an ironclad defence was his first priority and the return of Rio Ferdinand to partner Nemanja Vidic in the middle of it brought the stability he wanted. For all their domination, the home side was never able to break through with any real venom leaving keeper Edwin van der Sar with only two saves to make throughout the entire game.

Following the scoreless draw with Glasgow Rangers at Old Trafford in the opening Champions League match, these three points will put United back on track to qualify out of Group C.  Six points from back to back meetings with bottom placed Bursaspor in the next month will virtually secure United a place in the last 16. One final thought, the part played by the impressive Nani in creating the winning goal and the huge influence Ferdinand had in keeping Valencia scoreless must never be underestimated. 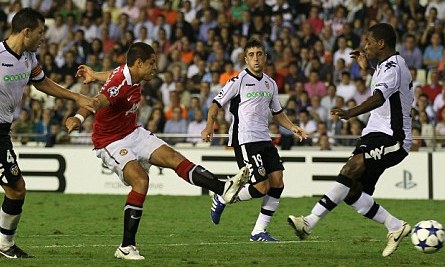 BBC Sport – Javier Hernandez stepped off the bench to get Manchester United’s Champions League campaign up and running with a late victory away at Valencia. Hernandez, who moments before struck the post, collected a pass from fellow substitute Federico Macheda and smashed a left foot shot low into the corner. Valencia had been the better side and Roberto Soldado headed over after Edwin van der Sar flapped at a cross.

Dimitar Berbatov forced Cesar Sanchez to save before Hernandez stole victory. It was harsh on La Liga leaders Valencia, but they were made to pay for not creating enough chances with the possession they had and being profligate with the ones they did manage to fashion. United boss Sir Alex Ferguson, having set his team up to keep it tight at the back and contain the Spanish side, will be absolutely delighted with the result ahead of two more eminently winnable Group C games against unfancied Turkish team Bursaspor. Full Report

Manchester Evening News – Strike breaker Chicharito was United’s Euro scab in Spain. The Spaniards downed tools yesterday for a day of action in the country and for so much of this match it looked like both sides were showing solidarity. Sir Alex Ferguson organised a few strikes himself as a shop steward in his dockyard days in Glasgow but it was his masterstroke substitutions that broke this one.

With a second Champions League Group C 0-0 stalemate staring United in the face and a meagre goal record in Spain haunting them the Reds boss put his faith in youth. First Javier Hernandez replaced Anderson and he was later joined with six minutes to go by teenager Kiko Macheda. Full Report

UEFA.com – Javier Hernández scored with five minutes remaining as Manchester United – no stranger to winning against the odds in Spain – beat Valencia despite being second best for much of the Group C fixture. A decade ago two substitutes, Teddy Sheringham and Ole Gunnar Solskjær, famously earned Sir Alex Ferguson’s team a dramatic victory over Bayern Munich in the UEFA Champions League final at the Camp Nou.

The prize was not as significant this evening but there was a whiff of nostalgia as, with Valencia looking ever more threatening, Javier Hernández took a clever assist from fellow replacement Federico Macheda and fired in. On the 28th anniversary of Valencia’s only victory over United it was a bitter blow to the La Liga leaders but a lesson in clinical, clever counterattacking. Full Report

Who was your man of the match for United?