As widely expected, Dimitar Berbatov was voted Player of the Month for September and really, who else could it have been? The Bulgarian is now displaying the form which manager Sir Alex Ferguson never doubted he was capable of despite two frustrating seasons at Old Trafford. United’s official monthly magazine Inside United spoke to Berbatov just after his Liverpool hat trick to relive his best day in Red and find out just what makes him tick.

As widely expected, Dimitar Berbatov was voted Player of the Month for September and really, who else could it have been? The Bulgarian is now displaying the form which manager Sir Alex Ferguson never doubted he was capable of despite two frustrating seasons at Old Trafford. United’s official monthly magazine Inside United spoke to Berbatov just after his Liverpool hat trick to relive his best day in the red shirt and find out just what makes him tick.

Dimitar, how does it feel to have written your own bit of Manchester United history?
I didn’t know before the Liverpool game that it was such a long time since any United player had scored a hat-trick against them. But afterwards I found out that no-one had done it for 64 years so I felt proud. It was a magical day for me. It’s not every day you score three goals against a team like Liverpool. But the most important thing was that we won. If the game had finished 2-2, even if I had scored two goals, it wouldn’t be pleasant. It was a great game and I hope everyone was entertained.

Everyone’s still talking about your amazing overhead kick. How was it from your point of view?
I was just in the box and I saw Nani’s cross coming. Wayne Rooney was in front of me and he was going for the ball so I was screaming for him to leave it. I think he heard me. Afterwards in the dressing room he said he did and that’s why he left the ball at the last minute. I saw the ball drop and there was no other way to control it except with my thigh and I just tried to do something different. In a situation like this, you don’t have so much time to think. The first thing that came into my mind was to take it on the thigh and try to hit it like this – pretending to do an overhead kick. Even when I did it, I didn’t know the ball was in. I was on the ground, turning around, and then I heard the crowd screaming. After that I knew something special had happened. 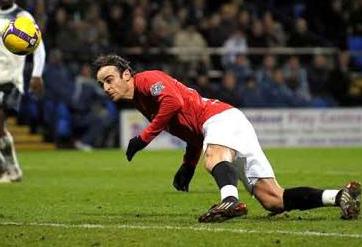 We enjoyed the third goal at Liverpool, not just because it won the game, but because it was more a classic centre-forward’s type of goal. How important is that physical presence in your game?
I don’t consider myself a classical centre-forward. I try to bring something different to the game. I depend more on my touch and my technical ability than to jump and play with my elbows. Obviously there are moments when you have to decide to rely on your technique, or to be more physical to try to score the goal. The third goal against Liverpool was also beautiful for me – it was a cross and you have just a second to think about what the defender is going to do and how you are going to outsmart him. I jumped just a second before Jamie Carragher to get ahead of him and that was it. You just need to be quick. It’s a simple thing. From the outside, it might look difficult, but it’s not so difficult.

Do you find it frustrating that you – and other strikers – are judged solely on goals, when you bring much more to the game?
You cannot be angry. Everybody thinks they understand football. People all around the world think they are experts. But for me a good player, a complete player, is not just about scoring goals. It’s about vision, about touch, about decision-making. I know lots of strikers who score many goals, but they don’t have the technical ability I like to see in players. I always like a player who can control the ball, who thinks two steps ahead – players like Zidane or Xavi. Or like Leo Messi, who is not a typical centre-forward. He is more of a midfield player who scores a lot of goals. For strikers, you are right, people judge on the number of goals, but for me there is more to it than that.

So do you feel it is as important to entertain as it is to score goals?
Yes. That’s my aim. You need to know when to slow it down, when to increase the tempo. Zidane was great at doing that. He knew what he could do with his touch and when a player is really sure in himself he can do great things. I know what I can do and I try to do it. I try on the training ground and when you see the goals a player scores in games, in some ways, he’s already scored that goal in training. You try to transfer skills from the training ground to the game.

Because you make football look quite easy, some people assume that you don’t work hard. But those skills take practice, don’t they?
Yes, of course. But it starts when you are just a boy. I remember when I was small I would kick the ball up high, maybe a thousand times a day just to try to stop it with my feet. I think because I did that, now I have good technique. So I knew how to control the ball and where to look, but when you become a professional player you continue to develop your skills. You need to practice and the only place to do it is the training ground. Or at home if you have a big house.

On the other hand, though, you have games where sometimes you think for a second, “What if I do that?” You’ve never tried it before but you just try. Like the second against Liverpool, I thought, “Well, you never know”. I already felt in that game that if I shot from the halfway line I was going to score. Honestly, you get some games like this where you feel everything is working for you and you feel powerful.

That level of confidence must be great. But what about when you’re not in such good form?
You need to stay strong. You need to believe in yourself and know what you can do. There will be periods where you don’t feel so great, but you have your team-mates and you have your manager who is always behind you.

The bond with your team-mates looks very strong, if the celebrations of your goals against Liverpool are anything to go by. Do you feel at home at United?
I do feel at home. And I know what you mean about the celebrations. I was watching the highlights and I saw that they were happy for me as well as for the goal, so that made me feel great. It shows that my team-mates have accepted me as part of the team. Sometimes you see a striker who scores goals and nobody goes to celebrate with them, but that really made me smile at home when I watched the game.

Would you ever consider moving back into midfield? You have the ball skills for it…
I keep trying to play in defence in training! But they all scream at me, “Go forward, go forward”. But I enjoy it. You never know. Many people start as strikers and then move to the midfield. My father was a striker and then he moved back to the defence. Maybe I’ll enjoy playing in the midfield when I’m 37 – as he pretended to use a walking stick.

You’re a father yourself now – how has that changed your outlook on life?
Can you believe it? We have two kids in the house now – me and my daughter, one-year-old Dea. I’m still learning. Sometimes I don’t know what I’m doing but at least I try. I’m having a great time. The crying’s a bit irritating sometimes, but we’ve all been there. I’ve got no complaints. As long as we all stay healthy as a family, I’m happy.

You do a lot of charity work for kids back in Bulgaria. How did you get involved in that?
I set up a foundation in my name and we work exclusively in Bulgaria. Here you have lots of famous faces, so you don’t need me. But Bulgaria is a small country and I try to use my name and whatever I can do to help. Especially for gifted kids – kids with special talents – because we have a lot of foundations for, say, sick kids, but I try to focus on those with talents, because in our country nobody is trying to help them succeed. I know how many people helped me to get where I am. It doesn’t matter if it’s sports or physics or acting, I try to help them.

Looking forward, what targets have you set yourself for the rest of the season?
My first target is to stay clear of injury. I think that’s the first target for everybody. So I work hard on our injury-prevention sessions with the coaches. And then you think about what you want to do in the season. Obviously, you‚d like to win everything, but it’s not easy, so you think about how you can help the team – score goals, make assists, as much as possible.

Finally, we all love your skills on the football pitch, but tell us something you’re rubbish at…
Ha! Tennis! And golf! Everybody seems to love golf around here, but me? I stay away. I can’t hit the ball. I’m terrible!