It’s not commonly known that veteran Manchester United defender Gary Neville gives his outspoken opinions about the club and football in general in a weekly column he writes for the Sunday edition of The Times of Malta. The connection with the island is not surprising as he often went on holidays there as a lad and owns a home where he plans to settle once he retires. In his latest column Neville gives his opinions on the scoreless draw at Sunderland and England’s prospects in the Euro 2012 qualifier against Montenrgro.

It’s not commonly known that veteran Manchester United defender Gary Neville gives his outspoken opinions about the club – and football in general, in a weekly column for the Sunday edition of The Times of Malta. The connection with the island is not surprising as he has often gone on holidays there as a lad and owns a home where he plans to settle once he retires. In his latest  column Neville gives his opinions on the scoreless draw at Sunderland and England’s prospects in the Euro 2012 qualifier against Montenegro.

He frankly admits that “We’re not disappointed about drawing 0-0 away last weekend because Sunderland played well and we did not at all. When we look back at the game at the end of the season I think we’ll see it as a point gained. In games when we miss chances or we’re on top and we get a draw then we are disappointed, but we didn’t deserve anything more than a draw in that game. 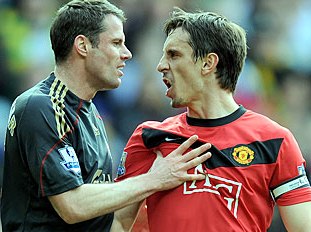 We defended well and kept another clean sheet following the one in Valencia and that is the main positive to take from the game. But generally our performance could have been better. Rio Ferdinand and Nemanja Vidic are a formidable partnership and they don’t allow many chances for the opposition. Having said that, Sunderland did have a few but as a partnership they have an air of authority. Ferdinand has played three games since he came back and we’ve had three clean sheets, so that speaks volumes about his worth to the team.

However, I wouldn’t say we have become more defensive because that is not in our nature, we try and attack all the time. Unfortunately against Sunderland we couldn’t get any of our attacking play going but that is just the way it is sometimes. There is obviously some concern about our away form because we have played four and drawn four – we would be better off winning two and losing two in terms of points. On the other hand, we haven’t lost a game this season and we have to take confidence from that.

But the difference between getting one and three points is significant, it is the difference between us being sat alongside Chelsea at the top of the league and being five points behind. Our away form hasn’t given us the points that our performances have deserved at times. We can’t have any complaints about drawing 0-0 at Sunderland but against Everton, Bolton and Fulham we could and should have done better.

Steve Bruce is doing a good job at Sunderland, just like he did at Wigan Athletic. Not only did they play well against us, they had a good result at Anfield the week before and they were unfortunate not to beat Liverpool. They have strength in depth, experience and some talented players.

Last weekend’s results mean we are now behind Manchester City in the league, which hasn’t happened too often in the past 20 years. There is no doubt that we have to see City as major challengers this season along with Chelsea. At the moment, City and Chelsea are above us and the money that City has spent, and the quality and depth in both squads, means we have to see them both as rivals for the title.”

An 85 cap veteran of England since making his debut in 1995, Neville offers some interesting views on Tuesdays Euro 2012 qualifying clash with Montenegro “Every game is potentially difficult if you don’t do your job right” he says “but England should beat Montenegro at Wembley. Their performances in the last few qualifying games have been very good so England fans should not be too concerned about Tuesday’s game.”

“I would expect England to stick with the system that has served them well so far in qualifying, with Wayne Rooney dropping a little deeper than the other front man. They have looked far more fluent than they did at the World Cup.”

Neville has been highly impressed with Arsenal youngster Jack Wilshere saying that “he played for Bolton against us last season and he had a bit of bite about him. During that game he and I had a bit of a tiff and I remember thinking the lad has some guts. He has good skill, he’s very comfortable on the ball and he’s done well for Arsenal this year. He certainly looks like an international player with the way he holds the ball up and keeps it in tight”

The odds of Neville ever playing for England again are remote but the experience built over 15 years of representing his country makes his views worth listening to. This season may also be the final one as a squad member at Old Trafford for the 35 year old defender who signed for United after leaving school as a 16 year old in 1991. It makes him one of  a distinguished group of Premier League players who spent an entire career with their one and only club.

Does Gary Neville deserve to remain at Old Trafford in some capacity after retiring?