Forlan will never forget those two strikes at Anfield

Ever since former Manchester United striker Diego Forlan was voted Golden Ball winner for best player at the 2010 World Cup there have been calls from many quarters for Sir Alex Ferguson to bring the Uruguay hit man back to Old Trafford. But the odds of it ever happening can only be described as highly remote at best. Ferguson simply does not sign players of his age unless he’s faced with exceptionally dire circumstances. Forlan nevertheless has fond memories of his time at Old Trafford – as manutd.com discovered when it had a chat with him prior to United’s recent 1-0 defeat of Valencia.

Ever since former Manchester United striker Diego Forlan was voted Golden Ball winner for best player at the 2010 World Cup there have been calls from many quarters for Sir Alex Ferguson to bring the Uruguay hit man back to Old Trafford. But the odds of it ever happening can only be described as highly remote at best. Ferguson simply does not sign players of his age unless he’s faced with exceptionally dire circumstances. Forlan nevertheless has fond memories of his time at Old Trafford – as manutd.com discovered when it had a chat with him prior to United’s recent 1-0 defeat of Valencia.

Apart from his performances for Uruguay in South Africa, he has enjoyed plenty of highlights since his transfer to Spain in 2004. He was twice top scorer in La Liga, once at Villarreal and again at Atletico Madrid with whom he won the Europa League and European Super Cup but he still cherishes the memories of his time as at United especially those two goals at Anfield in 2002. 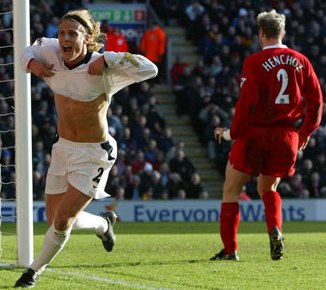 How do you remember those two goals?
Very clearly. They came at a difficult time for me. I was not playing so much and hardly playing in the big games. I didn’t feel like a footballer. I was training, but not playing. At the start of my time at United I was OK about sitting on the bench or even in the stands, but then I wanted to be playing 90 minutes. That game against Liverpool was one time I played a full game. It was not an easy game to start in and the first half was difficult, I didn’t see much of the ball.

Part of me was thinking that I was going to be substituted but it all changed in the second half. Gary Neville was the first to come up to me after the game as we celebrated. He looked me in the eyes and said “They’ll never forget you here after that.” I always remember that. I knew there was a big rivalry but I didn’t fully understand it. I was a guy from Montevideo, how would I? But I began to understand the importance after that, by the reaction of the players and the travelling fans behind the goal. And Gary was right.

You’ve gone on to great success after United. Where do those goals rank in your career?
They’re among the best. It doesn’t get much better than scoring twice for Manchester United at Anfield. I’ve worked hard and been lucky since I left United. I won the Pichichi which is Spain’s top goalscorers’ award twice and the European Golden Boot too. With Uruguay, we reached the semi final of the World Cup which was fantastic for us. We’re a small country of 3.5 million people. We’re like Wales, Scotland or Ireland. Can you imagine them reaching the semi finals of the World Cup? But none of those achievements earned me a special song like scoring at Anfield did!

You and Jerzy Dudek both live in Madrid. Have you played against him since or spoken about that game?
No, no, no. I’ve played against him a few times but not spoken to him. It’s not what you do. He’s a good goalkeeper and person. I don’t think he’d appreciate me reminding him. He’s bigger than me, too!

What do you think about United fans still singing your name?
It’s unbelievable. The first time it happened was just after I left. I wasn’t sure how the fans would be with me because my time at United was not perfect. By 2005 I needed to play every week and feel like a footballer. The gaffer understood that. That’s when I joined Villarreal and that turned out to be a great move. I played every week and scored lots of goals in a good team. I had a great understanding with Juan Roman Riquelme. A few months later, I was watching United against Liverpool with my brother at home near Villarreal.

And we heard the song “He came from Uruguay, he made the Scousers cry.” We just looked at each other as if to say ‘Are we hearing the same thing?’ He was as happy as me and we smiled for the rest of the game. I try and watch United and I’ll often see games in a hotel somewhere in Spain waiting to play. Sometimes I hear them sing and the team mate I am rooming with will say “What are you smiling for?” then I’ll explain. They can’t believe United fans still sing my name so long after I left.

You scored again at Anfield last season, for Atlético Madrid
That was fantastic because it was such an important game, the semi-final of the Europa League. Atlético had not won a trophy since 1996 and we reached the final that night. It was magical for us and the noise was so loud. So many teams lose against Liverpool away. We lost, but I got that away goal and it was enough to send us to the final in Hamburg.

How were Liverpool fans with you, being a former United player?
They booed me every time I touched the ball! I expected that because I used to play for Manchester United and it did not bother me. When I scored I saw some of their faces. They were not happy, in fact they were very unhappy! But I should also tell you what happened at the end of the game. As we were celebrating in front of the travelling fans, maybe 3,000 people who had come from Madrid, I looked around and saw Liverpool fans clapping us as the stadium emptied.

They didn’t need to do that. Most fans would not do that. They’d just been knocked out of a European semi final so that showed their class. And the people at Liverpool were very friendly with me, the security, the groundsmen, the officials. They shook my hand and told me that I always seemed to do well at Anfield. It was sad for them but they were very respectful.

Do you keep in touch with anyone from United?
The gaffer sent me several texts during the World Cup finals. He offered support and encouragement which I appreciated. He’s always watching, he never misses anything. I also keep in touch with Mike Phelan, coach Rene Meulensteen and Martin, the manager’s brother. Players drift apart so I don’t have any contact with the players but I still have contact with United people.

United play Valencia in the Champions League, what can we expect?
Valencia always give you a difficult game, a real battle. They’re a big club and the Mestalla is a great place to play, but they’ve lost David Villa and David Silva, who both scored against us Atlético last year. They lost other important players, but there have been many new signings and Unai Emery knows what he’s doing, he’s a good young coach. He did well at Almeria and he’s doing well with Valencia, sometimes in difficult financial circumstances. United will be favourites, but will need to be careful.

Atlético have started the season brightly. Can we hope to see you in the Champions League at Old Trafford next season?
That would be great. We’ve got a good side, the best I’ve played with in Spain. We won the Europa League and beat Inter in the European Super Cup final last month. We also reached the Spanish Cup final last season. So we’re confident we can reach the Champions League again and do better than last season. And to play at Old Trafford, that would be another dream. It’s a long time since I scored there.

Forlan is assured of receiving a warm welcome to Old Trafford if he should ever return with Athletico, even though fans will want him to wait a lot longer for his next goal there.

Was Forlan REALLY a failure at United or simply unlucky?