He’s not the first and he most certainly won’t be the last. Swedish striker Henrik Larsson has confessed that he made a huge mistake by turning down an offer from Sir Alex Ferguson to extend his stay at Old Trafford back in 2007. Larsson was signed on a short term contract earlier that year in what was the major shock in the January transfer window. He made an instant impact during the three month stay at United going on to claim a title medal for his part in their Premier League success.

The then 35 year old refused to renege on an agreement to return to Helsingborgs and left Old Trafford once the deal ended in March. Ferguson had even gone as far comparing the striker to the great Eric Cantona saying “He’s been fantastic for us, we tried everything we could to get him to stay longer but he made a promise and you have to respect that.” 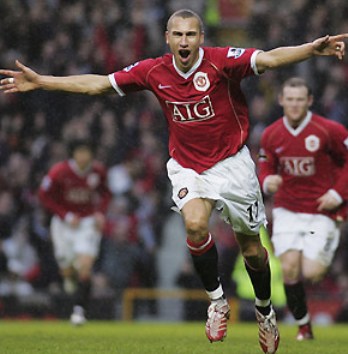 Now speaking exclusively to FIFA.com about the choices that have shaped his career, Larsson has acknowledged that one of his biggest regrets was turning down Ferguson’s offer. “If there’s one regret I have from my career, it’s that I came home to Sweden when Mr Ferguson was trying to get me to stay at Manchester United” he admitted “I should have stayed at United for longer because I had a great time there and everyone at the club was very keen to keep me.”

“My time there was too short” he continued “the whole experience was fantastic and although I was 35 at the time, I still felt that I had some good football in me. So yeah, that’s a regret. But to have the kind of career I had, it’s not bad if that’s the only one I have. I’ve been very lucky and you have to see it that everything happens for a reason.”

The statistics will tell you that this is a man who scored well over 300 career goals, played in three FIFA World Cups, earned 106 caps, collected a Champions League medal with Barcelona, won the European Golden Shoe and was voted Sweden’s greatest ever player. Manchester United won the title two months after Larsson had left the club and although he had not played the required quota of 10 league games to qualify for a Premier League winners medal, he was granted special dispensation after the club requested an extra medal for him.

Larsson grabbed three goals for United in a total of 13 matches with his last ever appearance at Old Trafford coming against his old club just a few days after his loan had expired. He received a warm ovation from the fans as captain of a Europe XI team in a UEFA Celebration Match.

United has been fortunate to see many greats pass through the Old Trafford gates over the years and despite his stay only being a fleeting one, Larsson was certainly one of them.

Was Ferguson right to compare Larsson with Cantona?