Greenhoff was a hero at both United and Stoke City

When Manchester United visit Stoke City on Sunday, the match will of course be played at the relatively new Brittania Stadium rather than the now demolished Victoria Ground where former United forward Jimmy Greenhoff spent seven years before joining brother Brian at Old Trafford in 1976. The highlight of Jimmy’s career came in the 1977 FA Cup Final where he scored United’s winning goal to deny Liverpool a famous Treble, an honor which was destined to be won by United itself 22 years later.

When Manchester United visit Stoke City on Sunday, the match will of course be played at the relatively new Brittania Stadium rather than the now demolished Victoria Ground where former United forward Jimmy Greenhoff spent seven years before joining brother Brian at Old Trafford in 1976. The highlight of Jimmy’s career came in the 1977 FA Cup Final where he scored United’s winning goal to deny Liverpool a famous Treble, an honor which was destined to be won by United itself 22 years later.

Greenhoff went on to make  a total of 123 appearances for United during four years at Old Trafford before moving on to Crewe Alexandra and a number of other clubs which included the Toronto Blizzard in Canada. He retired in 1984 but life has not exactly been a bed of roses for the now 64 year old as the Daily Mail discovered when it tracked  him down a couple of years back. 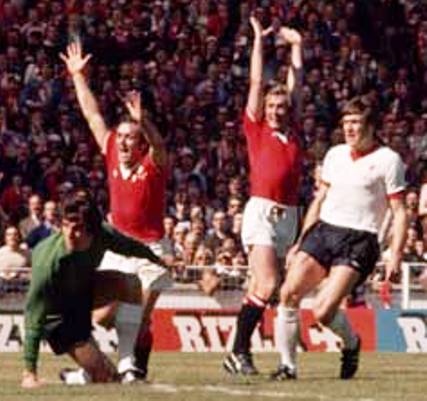 The report began by asking “How bad does it have to get before you sell your medals? How low do you have to sink? Is it when the house is repossessed? Or when the taunts in the warehouse get too much? “Hey Greenhoff! You’re not playing in the f*****g FA Cup Final now are you?” Happily for Jimmy Greenhoff, a veteran of two cup finals, the moment never came but it was close.

“I lost everything 12 years ago” the former Manchester United forward admitted “My business, my house and almost my health. I worked in a warehouse for a while and the taunts were pretty bad, I hated it. It was rubbish, brutal and yes, I could have sold the medals. I thought about it and it would have helped but how could I? My son would not have forgiven me. He loves that winner’s medal even more than I do and what would the fans have thought?”

“That medal belongs to them too” he continued “they supported me and United all the way. They paid good money to help us win the FA Cup. How could I flog it?” Many have cashed in of course. Some have had good reason, others have not. But from a career that spanned 20 years and seven English clubs, Greenhoff treasures his FA Cup finals the most.

In 1977 Greenhoff was credited with the winning goal after Lou Macari’s shot flew in off his chest to enable United to beat Liverpool 2-1 and derail an Anfield treble bid. Two years later, he was exhausted and out of form as a late United comeback could not prevent Arsenal winning 3-2.

He has no scrapbooks, no cuttings and has not even got the shirt he wore in 1977. That was stolen from the Wembley dressing room but he has his medals and his memories. “That competition was everything to us” he recalled “I can still see it all. I lost in two semis with Stoke in 1971 and 1972. I cried my heart out, it almost destroyed me. So to get to a final at last in 1977 was a dream come true. I had waited for it ever since watching the Matthews Final in 1953.” 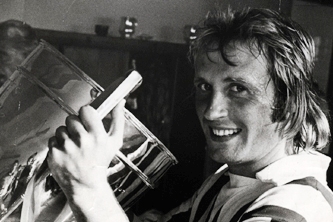 Greenhoff laments the current slow decline of the FA Cup and has no doubt that “It’s to do with money because these days the Premier League is everything” he said “but we have not helped ourselves. Playing semi finals at Wembley devalued the final right away and now we have managers resting players. All I can say is that if I had been left out of a single FA Cup game, I would have knocked on the manager’s door and asked why. I think Wayne Rooney is the same. He looks angry every time he is so much as substituted but I am not sure they are all like that.”

Greenhoff’s life remains less than comfortable. The fallout from a failed insurance venture in the 1990s continues to affect him. He works nights at a pharmaceutical company in Stoke. There are regrets but no bitterness. “Rio Ferdinand earns more in a week than I did in my career” said Greenhoff who was collecting £250 a week when he scored the winner in 1977 “I could do with some of that! But good luck to them. I wouldn’t have turned it down.”

On the dark days, the down days that he admits to, he leans on his wife Joan and dotes on grandson Marcus. He has fallen out with his brother and former United team mate Brian but there are always the memories to help him through. “I still can’t believe somebody nicked my shirt in 1977” he reflected “after we won the game it was bedlam in the dressing room. Everyone was in the bath, players, staff, kit men and when we got back to Old Trafford my bloody strip wasn’t there.”

“Ten years later I was doing an engagement in Cleethorpes and this bloke comes up and says ‘Jimmy, it was me. I took your shirt’. He was just a member of the public, walked in and took it just like that. He offered it back to me but I was so taken by his honesty I said he could keep it. I still can’t believe I said that. I would love that shirt back now, maybe that guy may read this and call me up.”

Two years later, Greenhoff broke Liverpool hearts with a goal in a semi final replay and United were back at Wembley to face Arsenal. “You walk out of that tunnel with a lump in your throat” he recalled “you see the blue sky first, always blue, and then the red and white scarves. Amazing.”

But this time there was no happy ending. Just back from injury, Greenhoff played poorly and after United scored two late goals to claw back a 2-0 deficit, Graham Rix crossed beyond goalkeeper Gary Bailey for Alan Sunderland to poke in one of the Cup’s most famous winning goals for Arsenal.

“Afterwards we were subdued” said Greenhoff “but our captain Martin Buchan went right up to Gary Bailey and said ‘I always knew your bloody left arm was shorter than the other’. It was harsh but he was convinced he was right.”

Cheers Jimmy, you have given thousands of Manchester United and Stoke City fans plenty of fond memories. Enjoy the meeting of your two former clubs this weekend – and hope that you will one day get your 1977 FA Cup final shirt back.

Was Jimmy or Brian the most valuable Greenhoff  at United?