To say that apart from his Manchester United fans, veteran Gary Neville is not the best loved footballer in England will be a gross understatement. Despite that, he will go down in history as an Old Trafford legend having become United’s 5th highest in the club’s all time appearance list behind Paul Scholes, Bill Foulkes, Bobby Charlton and Ryan Giggs when he made his 600th United appearance at Stoke.

Together with Giggs, Scholes and a handful of others, Neville is one of a dying breed of current footballers who have devoted their entire careers to just one club. The man who United fans have been singing “Gary Neville is a Red, he hates Scousers” for years must get a lot of satisfaction from never having experienced United’s bitter rivals winning a single League Championship since making his senior debut in September 1992. He was once famously quoted as saying that “When I was a youngster Liverpool won everything, it was horrible.” 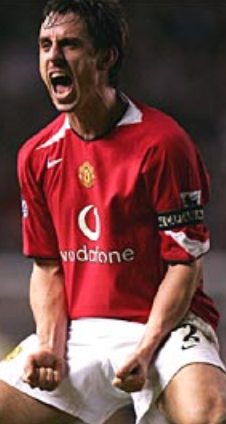 Nor for that matter has he had to endure seeing his cross town rivals Manchester City winning as much as one single trophy during his entire career. Neville was mischievously quoted in a newspaper column this week while commenting on the Wayne Rooney episode that “After a difficult week the best outcome has been reached for all parties – except perhaps Manchester City.”

Frankly, that could have been a typical Neville quote because he has never tried to hide his disdain for a club which he regards as just splashing a load of money in order to try and win something. As it turned out, it was a line which proves that newspapers do not just exaggerate what’s published, they purely and simply lie through their teeth in order to sensationalise a story.

The editor of the Sunday Times of Malta Steve Mallia has since been forced to publicly apologize and admit that his journalist embellished comments made by Neville in his weekly column saying that “With reference to Gary Neville’s column in The Sunday Times of Malta of October 24, the newspaper would like to clarify the following – at no point did Gary Neville state the phrase ‘Except perhaps Manchester City’. These words were added by the journalist who worked on the column with Mr Neville and were never intended to appear in the printed version of the article. Mr Neville did not utter these words, nor did he allude to Manchester City in any way. We apologise unreservedly to Mr Neville for our error and regret the considerable inconvenience it has caused him.”

So there you have it straight from the horses mouth. Credit must be given to Mallia for not attempting to fudge or excuse the outright lies made up by his own journalist but the episode clearly shows once again that believing what you read in the media without question can lead to pure fantasy being taken as gospel truth simply because, as many of us have so often said “but I saw it in the paper”

Are there too many people who believe everything that’s published in a newspaper?