The annual visit of  Tottenham Hotspur to Old Trafford is always eagerly anticipated by Manchester United fans because it has long been one of the classic fixtures in the English football calendar. Saturday afternoon’s meeting will be no different for two players who have entirely different reasons to anxiously await the big clash. While record United signing from Spurs Dimitar Berbatov always relishes playing against his old club, media reports this morning suggest that Gareth Bale could become the main man in Sir Alex Ferguson’s new look Manchester United.

According to a report in the last 24 hours, United’s American owners have given Ferguson the go ahead for a spending spree after Wayne Rooney voiced his concerns about the club’s ability to attract the world’s top players. The News of the World also suggested that Ferguson has £50 million to spend in the summer and is likely to make a move for the Spurs ace. 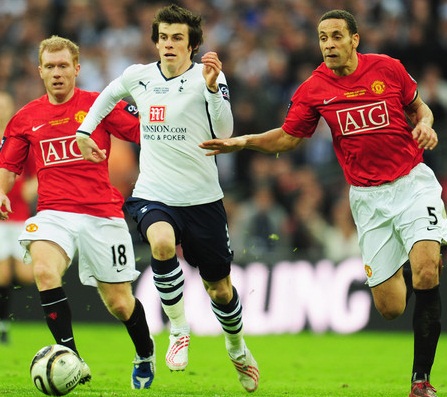 The Wales international has been one of the stars of the season and further enhanced his reputation with a brilliant hat trick in Tottenham’s 4-3 Champions League defeat at Inter Milan where boss Rafa Benitez has indicated he wants to land Bale. But the former Liverpool manager now looks likely to face stiff competition for the 21year old’s signature from United.

While Spurs are desperate to hang on to Bale, Ferguson may test Harry Redknapp’s resolve with a cash plus players offer involving Park Ji-Sung and former White Hart Lane favourite Michael Carrick. Is that a highly interesting scenario? You bet it is!

Saturdays 90 minutes at Old Trafford may well prove to be life changing for the young Welshman barely out of his teens. Just ask yourself what 21 year old  will not give his eye teeth to be at Manchester United under the guidance of a legendary manager who will be able to guide him to greatness?

An April Truly Reds article asked a simple question of fans Manchester United “Should United sign Gareth Bale?” and the overwhelming majority were of the opinion that he would be the perfect player to bring to Old Trafford but whether that response is enough to sway Sir Alex is beside the point. The 90 minutes on Saturday could very well settle the issue

Would you like to see Park Ji-Sung and Carrick exchanged for Bale?