John Darwin was a lifelong Manchester United fan and long term Old Trafford season ticket holder until 2005 when he became a founder member of FC United of Manchester. He simply refused to attend United matches while the Glazers owned the club. It was an agonising decision which he has never regretted and has not set foot inside Old Trafford since then. BBC Sport’s Chris Bevan spoke to Darwin about the reasons behind his decision, where he sees FC United going and why Manchester United can also become a community club when the Glazers are gone. Is it only a pipe dream? Maybe but Darwin certainly provides plenty of food for thought.

Darwin told BBC Sport “I am 48 and have followed Manchester United all my life but the last game of theirs I went to was the 2005 FA Cup final against Arsenal, when fans wore black to protest against the Glazer takeover. The arrival of the Glazers left United with more than £500m of debt and helped trigger the formation of FC United of Manchester by fans like me who were angry about what was happening to our club, but also disillusioned by Premier League football.

The years since then have taken us on an incredible journey, which started in Division Two of the North West Counties League. The latest landmark has come in the FA Cup and, although it is only the first round proper of a competition I regularly saw ‘big’ United win at Wembley, watching FC United play Rochdale on Friday night will be something really special. 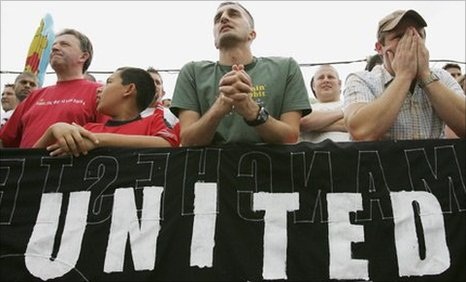 The biggest game in this club’s history was probably our first, against Leigh RMI in July 2005, but what I used to consider our best day came the week after that when we played a friendly against AFC Wimbledon, who are virtually our sister club because of their history and all the help they gave us in setting up.

That was a great moment, and was probably my favourite right up until the fourth-qualifying round win over Barrow last month that set up the tie with Rochdale. That one will take a lot of beating. A lot of FC fans in the crowd had tears in their eyes afterwards, and I must admit I got a bit emotional myself. That is definitely part of football and I’m not ashamed to say it.

Reaching the first round of the Cup is a great achievement but everything we have done in the five years since we were set up is definitely something to be proud of. AFC Wimbledon had already shown that fan ownership can work, and we are another example of that. There was a lot of hand-wringing by some fans about whether forming a new club was the best way to protest against the Glazers but, for me, it wasn’t a difficult decision to get involved with FC from the start.

I began going to Old Trafford in 1976 as a young teenager, and watched United regularly for 30 seasons home and away – but the Glazers’ arrival was definitely the right time to stop. With the other things that were going on, like the way supporters were being treated over issues like standing and pricing, plus the general over-commercialisation of the game, I’d really just had enough.

I still follow United on TV, when the games don’t clash with FC’s fixtures. In fact, it’s very rare I miss them. It’s just I am trying to divorce the football from everything that goes on around it. I was also in favour of the ‘Green and Gold’ anti-Glazer protests by United fans who still attend matches, because anything that raises the profile of the issue is a good thing.

But I believe that, ultimately, the only way to get the message across to the Glazers is by hitting them in the wallet – by not giving them my money. I know other people, no matter what they think about the Glazers, cannot give United up. Most of the friends I went to United with are still going to Old Trafford but, to be honest, I don’t miss anything about watching United there. I didn’t like the attitude of the stewards, or the atmosphere.

To some extent I do miss going to away games, but I get the same feeling from following FC anyway. Obviously, as a United fan, I had the mindset of expecting success most of the time. Winning sort of became the be-all-and-end-all and I used to wonder how and why supporters of lowly teams carried on. But I sort of understand that now.

It’s not really about winning at all. Yes, FC have won promotion three times and are now one level down from Blue Square Bet North – but the main thing about this club is its sense of community – the rapport among the supporters and making a contribution to the local area.

We have crowds of about 2,000, which is League Two level, but I actually don’t want us to climb further up the pyramid yet because we cannot afford to do it until we have got our own ground built. That is our main priority at the moment. 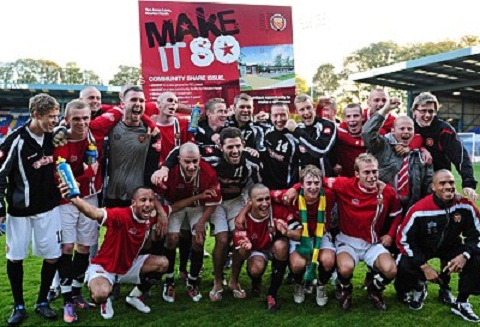 We are currently tenants at Bury’s Gigg Lane ground, but there are plans in place for a £3.5m community stadium in Newton Heath, the area where United started. We have got a grant for £650,000 from Manchester City Council but have to find the rest ourselves, which is where the Cup run comes in handy.

There has been a community share issue to raise some of the money we need for the ground but, no matter how much any individual contributes, they only get one vote over the club’s future – the same as anyone who pays £12 a year to be a member. That is to preserve democracy, which is one of the core principles of FC.

It’s great to see our club doing well, and in the spotlight again with what will be worldwide exposure. And I’m pleased for our players too because some of them could undoubtedly play at a higher level, or get paid more elsewhere, and this is some reward for their loyalty.

But the best thing about our game being televised is that it means the club will get £67,500 to boost our club funds. We need to improve our finances if we are going to progress. We are in this for the long haul and, if and when the Glazers do leave United, the foundations we are putting in place will hopefully sustain us.

To me, fans are as important to a club as the players, the manager or the stadium. I don’t see FC and United as being different clubs now, we are part of the same thing – and we are all in this together.

Can Manchester United ever become a community club and remain successful?