Prior to Manchester United’s visit to Aston Villa, England captain Rio Ferdinand gave an exclusive interview to the Daily Mirror’s David McDonnell in which he admitted that it was essential for United to commence a sustained winning run in order to keep pace with Chelsea. As it turned out, United were somewhat fortunate to get away from Villa Park with a point after trailing by two goals until ten minutes from the end but within 24 hours, that late fightback proved to be invaluable as Chelsea suffered a surprise 0-3 home defeat by Sunderland to leave United well within sight of the leaders.

That result went to show just how much Ferdinand was right on the money when he said that “Once we hit top gear we’ll have a real chance of winning the title but it’s alright saying we’re going to hit top gear, we have to do it right now. We know we’re capable of going on a long winning run and we’ve just got to make it happen. We’re unbeaten this season which says a lot for us. It shows we’re tough to beat but we’ve got to turn those draws we’ve been getting into wins.

“The most important thing for us at the moment is to win games. Going on a long unbeaten run is great, but we could draw our next 20 games and still not win the league. I’d rather win 15 games, lose a couple and draw a couple. Unbeaten runs are great if you achieve something, but if you don’t win anything then it’s no good.” 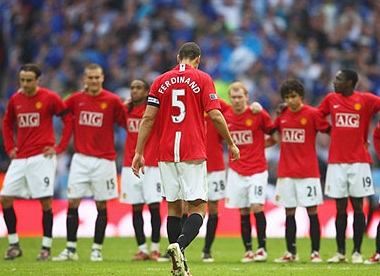 The latest of  United’s six draws in the Premier League at that time came in Wednesday’s Manchester derby at Eastlands, where City squeezed the life out of the game, setting out not to lose. Ferdinand admitted City’s cautious policy had frustrated United and said Sir Alex Ferguson would never allow his players to play in such a negative way in front of their own fans at Old Trafford.

“With City being at home, we expected them to come out and want to play against us” Ferdinand said “but they just sat there and waited for us to come to them. Our manager wouldn’t allow us to play that way. That’s why he’s achieved what he has. He wouldn’t allow us to play at home and not attack and express ourselves. That’s what the boss always says to us before every game – ‘go out there, express yourselves and enjoy playing football’ which is what we always try to do.”

“Everyone’s got their own style. Roberto Mancini is obviously Italian and has got his own way of thinking. If he thinks that’s the way he’s going to be successful at City then good for him” he continued “I can only speak as a United player and we would definitely never go out at Old Trafford and play defensively like that. It just doesn’t happen. City have got flair players like David Silva, Adam Johnson and Carlos Tevez so it was surprising they played the way they did. The game against City was probably our most solid, collective performance of the season. We controlled the game, defended well and passed the ball well in a pressurised situation away from home.”

Ferdinand admits however that United must remain defensively solid if they are to stay in contention for a record breaking nineteenth League title. “I want to re establish that partnership with the defence, to make other teams think ‘yeah, they’re a tough lot, we won’t get much out of them’. I was watching from the outside when we were conceding lots of goals and then I came back into the team and it happened against West Brom. We were leading 2-0 and it ended up 2-2. It was minor things that were causing it but they can become big problems so we had to nip it in the bud which I think we’ve managed to do.”

Ferdinand must continually manage the back problem which forced him to miss most of last season but was emphatic that he never thought his career was over. “All I was thinking about when I was out was getting back to training every day and playing again” he said.

“I never thought about retirement or anything like that. I’m just happy to be playing again, to be part of the squad on a daily basis. I’m training every day and not missing sessions or games like I was previously. I was missing playing, being a part of the team and the camaraderie that comes with that. It was hard not going out in front of the fans at Old Trafford and being a part of that. So it’s great to be back.”

There’s a long season ahead for Ferdinand, lots of time to show that another Premier League winning medal is there for the taking. Sunderland proved it beyond doubt in West London on Sunday

Can Ferdinand win another Premier League medal before retiring?