Sir Alex Ferguson has been told that Liverpool keeper Pepe Reina is the only man to succeed Edwin van der Sar at Old Trafford – and it’s advice which comes from a man who Fergie is certain to take notice of. United legend Peter Schmeichel reckons that the Spanish keeper should be United’s top target when Sir Alex looks to replace his 40 year old veteran at the end of the season.

And the great Dane who spent eight years at Old Trafford from 1991 to the treble winning campaign of 1999 also surprisingly insists that United should forget about his countryman Anders Lindegaard who has been dubbed the “new Schmeichel.” 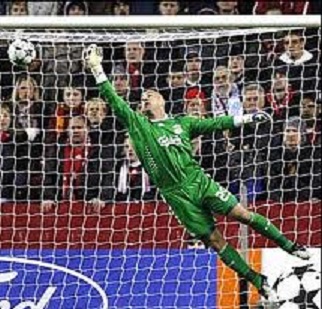 Lindegaard has been monitored closely by Ferguson and is high up on the list of keepers being considered but Schmeichel said “I don’t believe he’s one they are looking at. I’m pretty sure they would go for someone like Reina. You can look at talent, you can look at young, good players but you want someone that can go in straight away and give performances in 80 per cent of the games”

“Too many goalkeepers have been in and out of the doors at United” he continued “and I think now the general perception is, for this team to play well and win trophies, that position has to be someone who is of the very, very highest quality. But also with the right experience and that’s why I think someone like Reina would fit the bill.”

He says £20m rated Reina is the ideal man for his former club who have spent the last 12 months looking for a long term successor for the veteran Dutchman. Reina has been reported to insist that he’s fully committed to a long term contract at Anfield despite earlier reports suggesting he had told manager Roy Hodgson of his desire to leave.

“I have not told the manager that I wish to leave in January or at any time” Reina told Liverpool’s official website “it’s important our fans know this. I have a long term contract and am fully committed to the club.” Despite Reina’s reassuring words, Schmeichel is backing United’s pursuit of the Spaniard.

“The rumours are very, very strong around Old Trafford with this. A lot of goalkeepers are mentioned but Reina seems to be the one that fits in the team and if he ever was to leave Liverpool, which again there is a big, big rumour he will, Manchester United would be a great club for him to go to” Schmeichel insists.

“I hope Pepe Reina will go to United when Edwin calls it a day and I hear rumours that he is going to leave Liverpool so for him to go to United would be very, very good for us.”

Two points need to be made about these comments. Despite him having a spell at City in semi retirement, Schmeichel obviously still considers himself as one of the United family. The other question is whether this Old Trafford legend is merely stirring the pot on behalf of his old club or is he genuinely privy to some bona fide insider information? Very, very, interesting!

Can a transfer such as this really take place?

55 thoughts on “Shock Anfield to Old Trafford transfer may be on!”