Are we REALLY in 2010? Can such ignorance possibly still exist in a modern, western society? Manchester United travel to Glasgow next week to face Rangers in a European Champions League match. Reports are now emerging that Uniteds young Mexican striker Javier Hernandez could be forced to abandon his practice of saying a pre match Catholic prayer. Deeply religious Hernandez kneels on the centre spot and prays before kick off in every game he starts in but it’s believed United boss Sir Alex Ferguson – himself a former Rangers player, will advise the 22 year old not carry out his normal ritual at Ibrox.

I really don’t know if this is just a hysterical media beat up or if there might be some skerrick of truth in the story but The People newspaper reported that “Rangers fans have already vowed on websites to target Hernandez if he goes through his normal routine and that will worry Ferguson, who is anxious for United’s visit to pass peacefully. 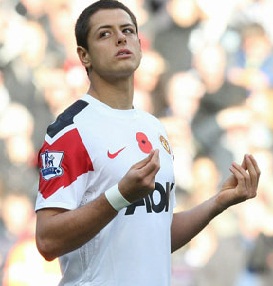 Rangers officials say there is no question of them banning Hernandez from his usual pre match routine which he started in his native Mexico. But he runs the risk of antagonising anti Catholic Rangers supporters if he is included in Ferguson’s line up when the teams meet at Ibrox. Hernandez has already played against Rangers in September at Old Trafford but Ferguson realises the atmosphere is far more volatile in Glasgow, notorious for religious sectarianism.”

In case some people have forgotten, this is nothing more and nothing less than a mere football match. What next, are Muslim players going to be abused by fans if they look at the heavens and thank Allah whenever they score a goal as they have so often done in the past? What is Monsieur Platini and Uefa going to do about it?

In the name of your God – whichever one you happen to believe in, GROW UP, otherwise go back into your pre historic caves.

Is there a place for religious intolerance in football?

90 thoughts on “UEFA must not tolerate religious bigotry at Ibrox”