The Wayne Rooney saga is ready to go into its next stage with the man now back at Carrington and seemingly ready to get back into action. But will he? Manager Sir Alex Ferguson is hoping to see his star striker rediscover his best form after struggling for goals this year. He has been at Nike’s plush headquarters in Beaverton, on the west coach of the United States for a week of conditioning work. As Sir Alex himself admitted however “Is he ready to get into the first team?” he asked “we still have to assess that”

The wily manager certainly made all the right noises when questioned by The Sun today. Ferguson blamed the whole contract drama on Rooney being badly advised by his handlers saying that “You don’t necessarily have to heed advice after listening to it. Some young people take bad advice. He has an agent who is not the most popular man in the world and he obviously sold it to Wayne to ask away. The boy rushed in” he believes “but the minute he heard the response of the public and our supporters, he changed his mind, he knew he’d made a mistake.” 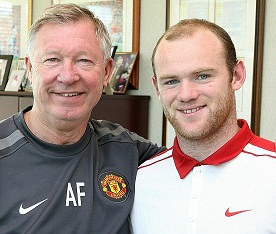 “There’s nothing wrong with that as long as you recognise it.” Sir Alex continued in his defence of Rooney “He immediately apologised and agreed a new contract within a couple of hours. It wasn’t done to get the contract, I don’t think that for a minute but maybe he should have listened to better advice.”

Ferguson’s first priority is now to get Rooney fully ready for action “We want to get Wayne back to his best” he said “he’s had a good week in the States and we’ve got him to the point where we want him to be in terms of accelerating his fitness.”

There’s little doubt that Rooney has a tough road ahead if he’s to finally put the last few months behind him. He will hopefully take the first step at Old Trafford this weekend. One or two goals will certainly take him a long way towards winning that battle.

Will Manchester United fans get to see the old Wayne Rooney in the next few weeks?