The Premier League was introduced to English football in 1992-93 with Manchester United claiming the first two titles but then a determined Blackburn Rovers came along in 1994-95 to prevent a hat trick.  Together with a moment of madness from cult hero Eric Cantona at Crystal Palace, a third successive title was narrowly prevented by a big spending Rovers side managed by former Liverpool legend Kenny Dalglish.

In their unrelenting pursuit of FA Carling Premiership glory, Blackburn Rovers again broke the British transfer record with the £5million signing of Norwich City striker Chris Sutton in July. That record was broken again in January by Manchester United who paid Newcastle United £6million plus the £1million rated Keith Gillespie in exchange for England’s Andy Cole. 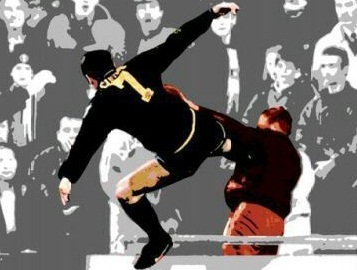 Another significant deal saw Tottenham Hotspur sign Jurgen Klinsmann from Monaco in a £2million deal before the beginning of the season. The German was involved in one of the campaign’s most thrilling matches on the opening day. He scored in a 4-3 win over Sheffield Wednesday and celebrated by diving across the pitch, a clear reference to his reputation for going to ground a little too easily.

Young Liverpool striker Robbie Fowler also made his mark in August, scoring a four minute hat-trick in a 3-0 win over Arsenal. That was a Premier League record and so was Manchester United’s 9-0 destruction of Ipswich at Old Trafford in February. Cole was man of the match, netting five goals.

It was a season that would go right down to the wire, resulting in Blackburn pipping Manchester United to the title on the final day. With Blackburn losing 2-1 to Liverpool, a win would have been enough for United but they were held to a 1-1 draw against West Ham at Upton Park. So United went into the UEFA Cup along with Nottingham Forest, Liverpool and Leeds United.

Manchester United striker Eric Cantona was the main headline maker of the season when he assaulted a Crystal Palace fan in January. The French striker sensationally launched a kung-fu style kick at Matthew Simmons who had been verbally abusing him from the stands. Cantona was banned from the game for nine months and fined £20,000.

The player later gave a press conference when he uttered one of the most bizarre quotes of the season, of any season. Journalists expected Cantona to comment on the Selhurst Park incident, but he instead came out with the following “When the seagulls follow the trawler, it’s because they think sardines will be thrown in to the sea.” Cantona then got up out of his seat and departed, leaving the assembled crowd bemused.

Nobody can doubt that the long suspension handed out to Cantona made the difference between United getting the one extra point which would have certainly secured another title. Arsenal manager George Graham was also in the news for the wrong reasons. He was sacked in February after it was revealed he had received an illegal payment of £425,000 from Norwegian agent Rune Hauge relating to the signings of Danish duo Pal Lydersen and John Jensen. Graham was later banned from the game for one year by the Football Association.

Arsenal finished the season 12th and briefly looked like getting pulled into a relegation dogfight that ultimately saw Ipswich Town, Leicester City, Norwich City and Crystal Palace drop down to Division One. 1994/95 was the season that four clubs went down and only two came up as the FA Carling Premiership was reduced to 20 teams.

Ironically, the relegated Crystal Palace is where Cantona’s mad moment almost certainly handed the title to Blackburn Rovers. The single point which in the end cost Manchester United a third successive title would have undoubtedly been obtained had it not been for his hefty suspension.

Where Blackburn Rovers worthy of a Premier League title that season?