The 2010-11 season is barely past the half way stage but you may want to note Wednesday January 5 in your diary. Manchester United did not even play that night yet it’s a date that could turn out to be THE pivotal day of the season. Arsenal and Manchester City both dropped two points in a scoreless draw at the Emirates while Chelsea and Tottenham were defeated at Wolves and Everton respectively.

The 2-1 defeat of Stoke City at Old Trafford the previous night left United holding a two point advantage over the rest of the challengers with a game in hand and two on City. Could Sir Alex Ferguson have possibly wished for a better set of results? Apart from that injury time equaliser conceded  at Birmingham, the holiday period gave United the perfect set of results to turbo charge them into the second half of the season. 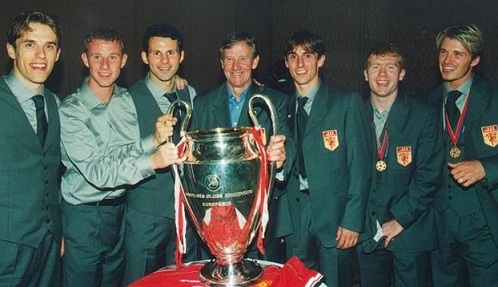 But Sir Alex is aiming at much further than this season. He is looking at the long term future of the club which indicates that retirement on turning 70 a year from now is the furthest thing from his mind. As the Daily Telegraph’s Mark Ogden explained this week “No fewer than six senior players are expected to leave United at the end of the season, with Edwin van der Sar, Gary Neville, Owen Hargreaves, Tomasz Kuszczak, Michael Owen and Wes Brown all likely to move on, either through retirement or a lack of first-team opportunities.

With doubts also hovering over the Old Trafford futures of Ryan Giggs and Paul Scholes, the United squad which starts the 2011-12 campaign could be the most youthful since Ferguson replaced Paul Ince, Mark Hughes and Andrei Kanchelskis with emerging stars such as Neville, Scholes, David Beckham and Nicky Butt in the summer of 1995.

While Giggs, who will mark the 20th anniversary of his United debut in March, and Scholes are expected to be offered one year contracts to keep them at the club next season, Ferguson now believes his emerging players, supported by the likes of Nemanja Vidic, Wayne Rooney and Darren Fletcher, are ready to make the breakthrough.

The United manager has admitted that his loyalty to those players who have served him for lengthy periods tests his ruthlessness, but that admission came with the concession that time is a commodity he cannot afford to waste – a reality which leaves Neville, Van der Sar, Owen, Brown and the injury-ravaged Hargreaves exposed.

Ferguson said: “When players grow old, their performance level drops, but we have to maintain a level of success at the top end of the game, at all the time. We can’t afford bad years or breaking-in years. We have had periods like that, but we don’t want it and we need to be successful all the time. Sometimes, when a player grows old, you have to recognise it and they have to move on.”

With 21 year old midfielder Tom Cleverley due to return from his loan at Wigan in the summer and Danny Welbeck, 20, set to be elevated to first team contention following his impressive campaign on loan at Sunderland, new signings are likely to limited to players no older than their mid 20s. Everton’s Jack Rodwell and Sunderland’s England midfielder Jordan Henderson are thought to be the long term targets.

The emergence this season, however, of Anderson and Rafael has led Ferguson to pinpoint the pair as replacements for Scholes and Neville. Having warned Anderson at the outset of the campaign that he faced a make-or-break season after failing to realise his potential since his £19 million arrival from Porto in May 2007, Ferguson has been sufficiently impressed by the 22-year-old to have sanctioned a new five-year contract for the midfielder last month.

And with Ferguson identifying Anderson as a replacement for Scholes four years ago, he believes he is now finally at the stage of being able to rise to that challenge. “Long term, I hope he can prove to be Paul’s successor” Ferguson said. “It’s a big ask to reach that level and the challenge will test his confidence, but someone will have to step up to the plate one day.”

Neville, meanwhile, has made just four appearances in all competitions this season and his loss of pace was exposed at West Brom last Saturday, with the 35 year old fortunate not to be sent off and concede a penalty following a badly time challenge on Graham Dorrans.

Rafael, in contrast, has emerged as first choice right-back with Ferguson admitting that the 20 year-old has made impressive progress in recent months. “Injury opens doors and the succession of setbacks suffered by Gary Neville has provided Rafael with more opportunities than he perhaps expected at this stage of his career” Ferguson said.

“He is one of several players who have moved their careers forward when they have been brought into the team.” Chelsea’s struggle to reduce the age of their squad this season has led to accusations that too many of their younger players lack experience, yet many of United’s have already figured prominently at senior level.

Ferguson has already earmarked Jonny Evans and Chris Smalling as long term replacements for Vidic and Rio Ferdinand, while he claimed last week that Bebe, the Portuguese winger, is now being moulded into a central striker to provide competition for Rooney and Dimitar Berbatov alongside Welbeck, Javier Hernandez and Federico Macheda.

The acquisition of Danish goalkeeper Anders Lindegaard, 26, is likely to be followed by the arrival of a more experienced replacement for Van der Sar, while teenagers Paul Pogba and Ravel Morrison can expect to be given opportunities to press their claims in the Carling Cup next season.

Putting the ‘young’ in Old Trafford

There are those who will scoff at some of these youngsters yet Ferguson appears to have plenty of faith in them. The man has been re energising his teams at Old Trafford for 24 years and I for one am not prepared to question his judgement.

How do you see a typical United line up three years from now?