Common sense dictates that Manchester United could, should and will get past the Liverpool third round FA Cup hurdle on Sunday but nothing can be taken for granted in football and there can be no better example than last season’s 0-1 home defeat by Leeds United to ram home that message. Like every other United fan, I crave defeating the Scousers and obtain safe passage to the fourth round BUT, if the unexpected should happen, I would much rather suffer a painful loss than face the prospect of an unwanted replay that in the bigger scheme of things, United can do without.

And it could get worse if future cup ties result in more replays at a time when the Premier and Champions Leagues are at a crucial stage. Let’s be perfectly honest, they, not the FA Cup must be the priorities. There has been talk of the FA removing replays from the calendar and deciding cup ties on penalties in the event of a draw so that a winter break can be introduced. As far as I’m concerned, the sooner that happens the better.

Who can possibly forget this? 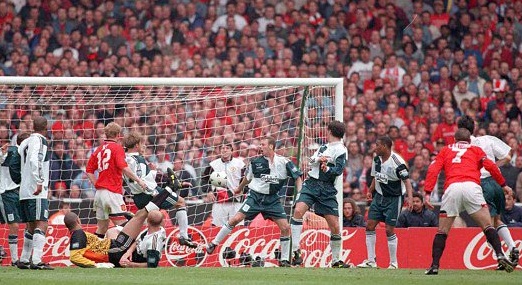 Concerns by lower division clubs of possibly missing out on a huge pay day by forcing one of the giants into a home replay are totally understandable and can be sympathised with but the fixture list has now got to a stage where something simply has to give with some clubs involved in Premier, Champions League, Carling, FA Cups and international matches in which many of their players have a duty to participate in.

Last seasons African and the current Asian Cup in Qatar are perfect examples of the new reality. They all come on top of the now obligatory, long, pre season tours which often take place on the other side of the world taking a toll before the long season even commences.

FIFA President Sepp Blatter must be one of the most universally disliked men in football – I will not use the word hated because there should never be any hate in the game, and disagree with most of his opinions, but there’s a lot of merit in his suggestion that the Premier League should be reduced to 18 clubs. A mid winter break will offer so many benefits to clubs, managers, most importantly players and let’s face it, to the fans.

If replays cannot be eliminated from cup competitions then why not at least give clubs who are still involved in Europe after December the option of withdrawing from the FA Cup? That has to be much more ethical than some teams fielding second string line ups against lower division clubs in order to rest their senior players.

Seeing Manchester United losing to Liverpool at anytime – even if it’s only in a game of marbles, is hard to live with but I have to admit that the last thing I want to see on Sunday is a draw which forces a replay into an already crammed calendar. As difficult as it will be, I would rather taste the bitterness of defeat than to see the chances of a 19th title and progress in the Champions League jeopardised by what has become a second rate cup competition.

Would you rather see United defeated by Liverpool than face a replay?

10 thoughts on “Win or lose to Liverpool but please, NO REPLAY”