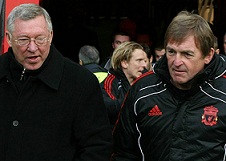 Resurrected old/new Liverpool manager Kenny Dalglish came to Old Trafford on Sunday and while he did not exactly Walk Alone back to Anfield, there was certainly no Triumphant March from Aida blaring in the background! As a matter of fact, he was quick to come out with the expected after match bitter mutterings of ‘that penalty was a joke’ and ‘it was never a red card’. Nothing unusual, it’s what Scousers do best whenever they get beaten – which has become the norm this season. I fully understand that this is a Manchester United blog and what happens at Anfield should be none of our business BUT before I get accused of being ‘obsessed’ by Liverpool – another common Scouse boast, stay with me as I explain why there may well be a lesson for United in all of this.

Sir Alex Ferguson is bound to announce his retirement from the United job one of these years, to the relief of Liverpool and many of his rivals, and the appointment of his successor will be one of the toughest decisions the club has ever had to make. This is where the connection with Dalglish comes in. Liverpool spent 20 unsuccessful years trying to replace King Kenny before going back to their distant past. 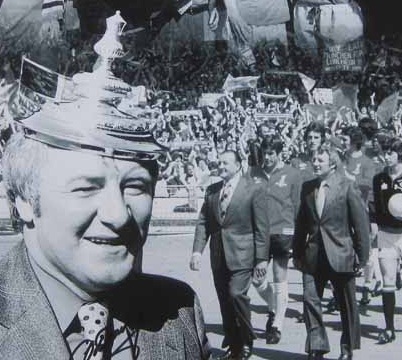 Why not save all that time when Sir Alex retires and take the easy way out by also digging into history? The ‘Doc’ can be brought back, after all he did win an FA Cup for the club in 1977 as did Big Ron twice in 1983 and 1985. I’m sure that both Tommy Docherty and Ron Atkinson would feel that they have ‘unfinished business’ at Old Trafford and would jump at the chance to make a comeback.

But that’s not all folks! Before long you’re sure to be hearing loud calls by desperate Scousers for Dalglish to lace up his boots once more in order to help dig their club out of the hole it’s soon going to find itself in. The new American owners will listen to them again just as they did last week, and offer King Kenny a playing contract. After all, what “the best fans in the world” want they get, otherwise they will simply start a vindictive email campaign to destroy you.

So what’s good for poor old Liverpool should also be good enough for United. Captain Marvel can be called back to skipper the side once again, Eric Cantona can be encouraged to put his acting career on hold for a while in order to inspire the United youngsters and hell, even Denis Law looks fit enough to come off the bench and grab a winner or two. If things get really desperate, don’t forget that Paddy Crerand is still around!

Just to remind you what the old First Division looked like when Dalglish walked away from Anfield on February 22 1991, before the Premier League even kicked off. The 20 clubs and their managers were

The remaining eleven clubs are struggling in the lower divisions

Only two managers remain in the top division – Ferguson and the reincarnated Dalglish. The rest are either sadly no longer with us, struggling to get back into the game or are completely out of football.

The world has changed dramatically in the last 20 years – and so has the game. Is Liverpool wise to base their whole future on past history? Only time will tell but as one of their own fans said in a national newspaper a couple of days ago “This will end in tears”.

Was all this written with tongue firmly planted in the cheek? Quite frankly, yes. Let’s all hope and pray that United will never find itself in the same position that Liverpool now has.

What’s the most fundamental change in the game since 1991?

7 thoughts on “If Dalglish can return, the Doc can follow Ferguson”