So why am I talking about Citeh you may ask? After all, this is a Manchester United website. The answer is simple. Despite what City assistant manager Brian Kidd tells the media, the Blues major objective this season was not just to get a top four position or win some sort of silverware. City are desperate – and their fans absolutely crave, finishing ahead of United in order to claim bragging rights. Nothing  matters as much as that for them hence those juvenile billboards erected across the City! If, and I concede that it’s a mighty big IF, that challenge is over before the end of January, United fans have every right to gloat about the seemingly endless superiority their club has enjoyed over the Blues for decades.

An oil Sheik outlaying millions of Euros, a chief executive who cannot keep his mouth shut and a manager demanding more and more spending to achieve some sort of success cannot stop Sir Alex Ferguson from keeping the pretenders in the shadows of the club he virtually rebuilt, brick by brick, in his near quarter of a century at Old Trafford – and therein lies the magical secret that City cannot seem to grasp! 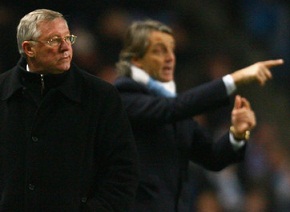 Long term success has to be patiently built not bought over a relatively short period of time. There are some realities in football which are so solidly set in stone that nothing will ever change them. Everton will never be the major club on Merseyside, Real will always be the ‘big’ club in Madrid irrespective what Athletico may try to do while Arsenal and Spurs will remain London’s senior clubs even if Chelsea manages a couple of occasional titles.

Manchester City may – just may, finally win some sort of trophy to get the 35 year old monkey off their back but you can rest assured that their dream of one day becoming the ‘biggest’ club in Manchester will always remain just that –  ‘The Impossible Dream’

Does  Citeh fans deserve sympathy for their years of suffering?