Wolverhampton Wanderers host Manchester United on the back of an away defeat to Bolton on Tuesday when a disastrous Ronald Zubar back pass allowed Daniel Sturridge to steal a 93rd minute winner at the Reebok Stadium. In it’s preview of the game manutd.com continued That result left Mick McCarthy’s men three points adrift at the bottom of the Barclays Premier League, in the starkest contrast to United who are now five points clear at the right end of the table. Sir Alex Ferguson’s current side have matched the 1999 Treble winners’ run of 29 league games without defeat and will fancy making it 30 having won all six clashes with Wolves since losing 1-0 at Molineux in 2004. Both clubs were then in the same positions they are now – top and bottom. 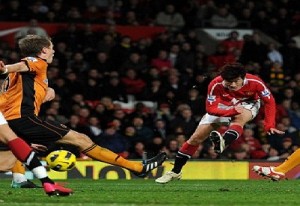 Wolves’ new signing Adam Hammill should retain his place on the wing after a successful debut against Bolton, whereas on loan Jamie O’Hara looks set to make the bench. United have no fresh injury concerns – Darren Fletcher has recovered from an eye problem picked up in Tuesday’s win over Aston Villa and Rafael should return after being given the all clear from the concussion suffered at Blackpool.

Wolves 24 year old winger Matt Jarvis is one of the most exciting young players in the top flight. With pace, skill and a naturally gifted left foot, he has been a shining light at Molineux this season. His impressive performances have caught the eye of England boss Fabio Capello resulting in the former Gillingham midfielder’s inclusion in a provisional 30 man squad to face France in November. Jarvis will reportedly be a summer transfer target for both Liverpool and Manchester City despite signing a new five year contract with Wolves in September.

Will United stretch their unbeaten run? There should be little doubt on paper BUT this is the sort of fixture in which the form book can be turned upside down so UNITED BEWARE