This was far too good to pass up for a United fan. It’s reproduced here just as it was published on the Mail Online with no further comment from this smart arse. “The match programme for Manchester City’s Europa League tie with Aris Salonika was scrapped at the last minute after it emerged the Greek club had mistakenly printed a spoof team photograph of their English opponents. A few copies made it into circulation for Tuesday night’s game in Thessaloniki, but the bulk were withdrawn by embarrassed Aris officials when the blunder came to light.

It appears the club’s programme designers had downloaded the digitally doctored team photo from the internet. Standing alongside Roberto  Mancini and his players are a host of star names who have been linked with City at one time or another, including Wayne Rooney, Fernando Torres, Cristiano Ronaldo, Mesut Ozil and Zlatan Ibrahimovic. 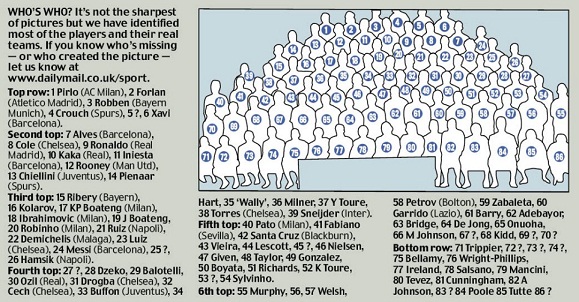 Amazingly, their suspicions were not aroused by another figure standing between James Milner and Joe Hart wearing a red and white striped hat and top to resemble the ‘Where’s Wally?’ character from the children’s book series. Aris desperately tried to cover up their mistake and, asked why there were no programmes available on the night, press officer Chrisanthos Tsaltidis simply said: ‘Big problem.’

City officials were made aware of the situation at an official UEFA function on the day of the game. They are said to have seen the funny side and did not ask for the programmes to be scrapped.

Does that come close to being your best the laugh of the week?