A Wigan Athletic and Premier League debut facing Cristiano Ronaldo in 2008 was tough enough but a club century appearance directly opposing Manchester United’s form player Nani three years later is no easier for Honduran defender Maynor Figueroa. In line to make his landmark mark for Wigan on Saturday, the 27 year old explained how his tough initiation into English football was one of the main factors in him reaching the unique milestone. He will join Paul Scharner, Chris Kirkland and Mario Melchiot in the exclusive club if he features against the league leaders this weekend.

Thinking back on his baptism of fire, Figueroa remembers how the reality of the demands required at this level soon helped him adjust to the Premier League’s high standards “I remember the game well and still have the programme from that day at home as a memento of a proud day, these are memories that as a player you look back on later in life and cherish” he said. 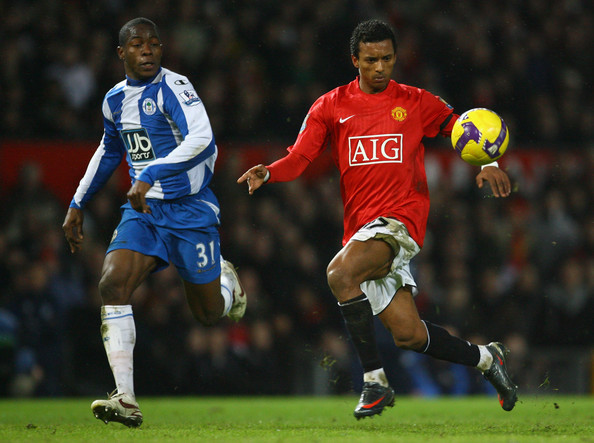 “I remember Manchester United needed to win the game to win the title, and I was tasked with the job of marking Cristiano Ronaldo – some introduction to the Premier League! But the opportunity to play against such a great player allowed me to show what I could do, it made me realise early on what kind of focus is needed at this level and is one of the reasons I’ve managed to play 100 games”

Figueroa is fully aware that although he won’t be facing Ronaldo again this weekend he’ll still have a tough task should he play but is confident that Wigan has the ability and form to record their first Premier League result against United.

“After the last three league games our confidence is high and instead of worrying ourselves with league positions we’re focusing instead on our own performances which has been the key” The record books shows that Wigan have failed to win a single point against United in eleven clashes since their first Premier League encounter in December 2005.

Wigan boss Roberto Martinez has no illusions about the task facing his side admitting that “Our performance will have to be perfect, but United are the only side we’re yet to defeat and that gives the players extra motivation to get a result” he said “we know we’re playing against a world class team on but one thing we have learnt from this season is that the points we’ve earned have all come down to our performances. It means we know how we have to perform in order to compete against a mature Manchester United side.”

Logic points to United extending its winning run over Wigan to regain the four point margin over Arsenal at the top of the table but as Wolves showed at Molineux earlier this month, nothing can ever be taken for granted in this highly unpredictable title chase.

Will three points at Wigan this weekend set up United for a record breaking title?