Why has Scotland produced so many of the best football managers in the world? Based on exclusive interviews with the men themselves, their players or close friends and family, authors Michael Grant and Rob Robertson reveal the huge contribution that Scottish managers like Sir Alex Ferguson, Sir Matt Busby, Bill Shankly, Jock Stein, Tommy Docherty, Jim McLean, Kenny Dalglish, George Graham, Walter Smith, Gordon Strachan, Alex McLeish and David Moyes, as well as a host of others, have made to the world game.

Never before has a book tackled the subject of Scotland’s extraordinary football managerial success, questioned why and how Scotland has produced so many of the very finest managers ever to be associated with the game and so exhaustively researched and interviewed so many key characters in search of the answer. And the result? The Management is one of the finest sports books to appear this decade. 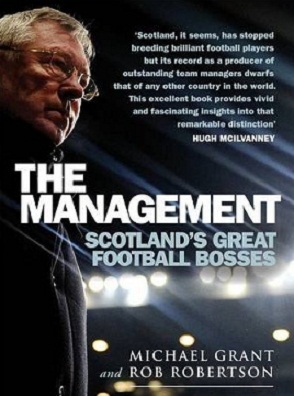 Is that an exaggeration? Have a read and see if you can find any many better. The scope and breadth of the subject matter is vast, the skill with which it is relayed is exceptional, and the relentless fascination that it engenders has you turning page after page. It is a truly enthralling story, one that goes beyond football, beyond the confines of Scottish club and international management and delves into the very heart of Scottish life and society, into the very heart of the Scottish psyche. It is a story that seeks out answers from the depths of Lanarkshire mines and Clyde shipyards to the glamorous corridors of Old Trafford, Anfield, Highbury and Stamford Bridge.

With interviews ranging from the great men themselves, to the players who served under them, the men who assisted them, and to the family members who knew them best of all, no stone has been left unturned as Grant and Robertson seek to answer a question that has burned on a thousand lips since the halcyon days of Busby, Shanks and Stein, and which continues today as Sir Alex Ferguson’s wonderful achievements forge a path that a new generation of Scottish managers hope to emulate. It is a spellbinding read, one that is set to become a classic.

This is a really enjoyable book for those with an interest in how football operates behind the usual bluster of the newspapers. It has a nice historical view of the influence of Scotsmen as football developed around the world. There are lots of humorous anecdotes and a real feeling for the highs and lows of the characters involved.

Interviews with those who are still alive, and comments from those near to them, give the book substance. There is a fair attempt to explain the psychology of the managers or their resistance to such ideas. For football followers you can delight in recalling your memories around the key events in Scottish football lore.

There is a detailed list of who won what. The book takes us right up to the present day, although the fact that Craig Brown has taken on a new challenge at Aberdeen at the age of seventy shows there will be opportunities for an update, and I will certainly look forward to reading it.

Ferguson is the most successful but has there been a better Scottish manager?