Sir Alex Ferguson’s teams simply do not lose three successive Premier League matches, at least that’s what the history books show. The last time it happened was in December 2001, the season that Bolton Wanderers ended a four year Premier League exile. Despite a number of injuries for Saturday’s visit by Bolton, United are still warm favourites to get back to the winners list following defeats at Stamford Bridge and Anfield. The history books also show however that when Bolton came to Old Trafford upon their return a decade ago they caused one of the biggest boilovers of the season by taking all three points off the champions in a shock 2-1 upset.

As Ken Gaunt reported for PA Sport at the time “Bolton manager Sam Allardyce got a belated birthday present when he steered his side to an unlikely victory. Just 24 hours after his 47th birthday, which coincided with his second anniversary at the club, he saw his team secure three valuable points at the home of the champions. It was Bolton’s first victory in seven league games with the winner coming from Michael Ricketts six minutes from time. 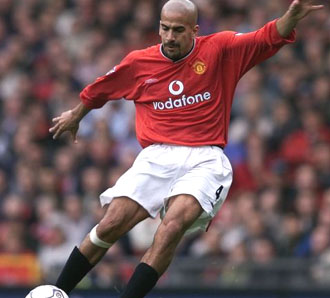 Juan Sebastian Veron had put United ahead but Kevin Nolan equalised to set up a grandstand finish to the match. Manager Sir Alex Ferguson rang the changes with an important Champions League match with Olympiakos to come on Tuesday. David Beckham, Ruud Van Nistelrooy, Denis Irwin and Laurent Blanc were all missing while Ryan Giggs and Gary Neville were on the bench. Roy Keane was also absent through suspension while Ronny Johnsen has a hamstring injury.

After such a poor recent record Bolton went into the match with just Ricketts as the lone striker. With Bolton getting men behind the ball at every given opportunity, United were having to be patient.

United broke the deadlock in the 25th minute thanks to a superb free kick from Veron. He rattled in an unstoppable 25 yard drive after Gudni Bergsson had been penalised for a challenge on Cole. The United striker then found himself in a good position two minutes later but his effort didn’t trouble Jaaskelainen.

Bolton were stunned but managed to draw level in the 35th minute with a wonderful strike from Nolan. N’Gotty drove a crossfield ball into the path of Ricketts, who nodded it on to Nolan. He didn’t waste any time and smashed a volley from the edge of the area beyond a startled Barthez.

United picked up the pace at the start of the second half and Solskjaer tried to pick out Cole but not for the first time in the game Jaaskelainen was quickly off his line to block his run.

Bolton were proving more than a match for United and looked dangerous on the break. Jermaine Johnson, who replaced Paul Warhurst, got away down the right but his cross was just too high for Ricketts.

United made a double substitution in the 67th minute with Giggs and Luke Chadwick replacing Scholes and Yorke. United were rocked back on their heels in the 84th minute when Bolton went ahead. Brown lost possession to Ricketts and the former Walsall striker raced on to beat Barthez with a powerful drive.

Dropping the last six points now makes Bolton a must win clash for United but as was shown back in October 2001, football can never provide any guarantees – especially in the Premier League.

Will the failure to take all three points off Bolton prove fatal for United?