Eight matches remaining, 24 points up for grabs and Manchester United must get every one of them from clashes like the one at West Ham on Saturday if they want to keep their nose in front of their rivals. As Sir Alex Ferguson often admits ‘It’s squeaky bum time’. There have been many dramatic meetings between the two over the years with the eight goal thriller in March 2002 one of the most memorable. Fans may not witness another goal fest this time but the stakes are high for both sides – albeit for totally opposite reasons, which will all but guarantee another tense battle.

This is how PA football writer Mark Bradley described West Ham’s 3-5 defeat that afternoon – “Rising above his ridiculous pantomime villain status in these parts, David Beckham returned to his East End roots to inspire Manchester United to a mesmerising win that effectively summed up their season. Having put the lowest point of their campaign in losing at home to West Ham firmly behind them, United were not about to let the setbacks of twice falling behind at Upton Park to interrupt their recovery. 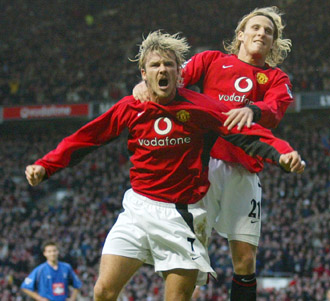 Then again, they were still vulnerable at the back and having stormed into a 4-2 lead, still had to survive a frenetic final spell after substitute Jermain Defoe’s strike with 12 minutes left. After a tumultuous game of wildly contrasting fortunes, extreme emotions and sheer drama, it was appropriately enough left to Beckham to settle the outcome late on.

Having previously put his side level at 1-1 with an exquisite lob and been intricately involved in two other goals, he struck the penalty which confirmed that United moved back above Liverpool to the top of the table. In doing so, they managed to overcome a notorious stumbling block for their title hopes, having been tripped up at Upton Park in both 1992 and 1995.

West Ham, whose victory at Old Trafford in December left United being written off by some observers, exploded into action again in this encounter. With just seven minutes gone, Steve Lomas met Vladimir Labant’s deep cross with such power at the far post that Fabien Barthez could only claw the ball onto the bar and back down into his own net.

But an inspired Beckham provided a memorable riposte on 17 minutes. Joe Cole needlessly gave the ball away as he attempted an over ambitious cross field ball. Paul Scholes sent Beckham scurrying away and as keeper David James came out, the midfielder nonchalantly lobbed him. Upton Park was, to put it mildly, unimpressed by his wild celebrations but Frederic Kanoute soon answered back as he swept home Sebastien Schemmel’s low cross.

This time, West Ham’s lead lasted all of 60 seconds as Beckham turned provider to deliver a free kick from which Nicky Butt headed home from close range. The frantic tempo finally, and perhaps inevitably, dipped after that unforgettable 20 minute explosion of action.

United seized the lead 10 minutes after the break as Solskjaer evaded the attention of two markers and cut the ball back for the unmarked Scholes to convert from close range. West Ham then self destructed in failing to cut out Beckham’s cross as Solskjaer struck United’s fourth at the second attempt. James redeemed himself with a superb save from Keane and with 12 minutes left, West Ham gave themselves hope of an unlikely comeback of their own.

Substitute Jermain Defoe, who had struck the winner at Old Trafford back in December, had only been on the pitch for four minutes when he converted Kanoute’s cross. But referee Mark Halsey then deemed that Repka had brought down Scholes and up stepped Beckham to round off an unforgettable afternoon with a flourish.

Can fans realistically expect another glut of goals on Saturday?