Manchester United virtually relinquished their title almost twelve months ago to the day when they went down to Chelsea at Old Trafford. For over an hour at Upton Park it looked as if history was about to repeat itself with West Ham holding a commanding 2-0 lead. That was until Wayne Rooney finally emerged from a frustrating season to grab himself a hat trick inside a quarter hour to propel United to a 4-2 victory and go eight points clear at the top of the table.

Ferguson told Sky Sports 2 “We played like champions, we kept our heads and didn’t lose faith in our ability. It’s never easy coming here. They are fighting relegation but we had to do our thing. We dominated that second half and it was a real championship performance. It was eventful” he admitted “being two goals down was a travesty in terms of possession and chances created. We were under the cosh so I felt we had to go for it. We needed to get something from it.”

With both Chelsea and Arsenal each dropping two vital points later in the afternoon, it prompts the question as to whether United has got one hand on a record breaking title. While the head says NO because it’s much too early, the heart shouts out an emphatic YES. 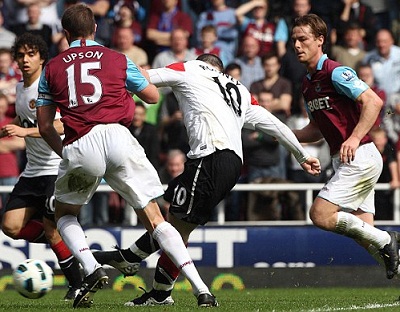 Telegraph – Wayne Rooney struck a second-half hat-trick as Manchester United came from two goals down to beat West Ham 4-2 and strengthen their position at the top of the Premier League. Mark Noble had scored twice from the penalty spot at Upton Park but the hosts felt Nemanja Vidic should have been dismissed by referee Lee Mason for denying Demba Ba a goalscoring opportunity.

United took full advantage in the second half, with Rooney pulling a goal back before levelling with his 100th league goal for his club. The England striker then established a lead with a penalty after Matthew Upson’s handball, before Javier Hernandez grabbed another. Full Report

This Is London – Wayne Rooney scored a dramatic hat-trick as Manchester United produced another sensational late comeback to beat West Ham 4-2 and edge closer to the Barclays Premier League title. United appeared certain to open the door for Arsenal and Chelsea when their defence went into meltdown, gifting the Hammers two first-half penalties which Mark Noble duly dispatched. But the leaders were rewarded for going for broke in the second half, Rooney starting the fightback with just 25 minutes remaining, completing his 14-minute treble from the spot before substitute Javier Hernandez sealed the points.

The result moved United eight points clear ahead of Arsenal and Chelsea before their respective games, while dragging West Ham back into the drop zone. Old Trafford boss Sir Alex Ferguson spent the build up to the game bemoaning refereeing decisions he claimed had gone against his side this season. But United got the rub of the green with captain Nemanja Vidic lucky to stay on the field. Full Report

Manchester Evening News – Wayne Rooney scored a hat-trick in 14 minutes as Manchester United completed a sensational turnaround to keep their Premier League title challenge on track. The Reds trailed 2-0 at half-time after Mark Noble converted two penalties after Patrice Evra handled in the box and then Nemanja Vidic hauled down Carlton Cole. United were struggling to break down the Hammers until Rooney scored his first with a 20-yard free-kick that curled past Robert Green in the 66th minute.

Eight minutes later, he levelled with a neat finish on the angle from the edge of the box. And he completed his hat-trick from the spot in the 80th minute after Fabio’s pullback struck Matthew Upson on the arms. The result was sealed in the 85th minute when Ryan Giggs’ cross was finished by Javier Hernandez from close range. Full Report