DATELINE – Munich, March 30, 2009. A sensational season virtually came to an end for Wayne Rooney as he went down in a heap with an ankle injury seconds from the final whistle at Bayern Munich thus beginning a year made in hell for the golden boy of English football. A disastrous World Cup was soon followed by lurid tabloid headlines, a ‘dream’ marriage clearly on the rocks, lengthy court cases against him and his personal manager, a stunning transfer request which rocked the game and his personal life in total turmoil. The current season went on and on with no apparent relief – until the weekends game at West Ham.

Rooney’s first hat trick in fourteen months brought United back from the dead and must have lifted what would have seemed to be the whole weight of the world off his shoulders. So here’s a word of advice to the suits in authority – don’t even think of dreaming up some sort of charge against a young man who let out a year of  frustration by telling the television cameras, inches away from his face and to nobody in particular “WHAT?!  F*****G  WHAT?!  WHAT?!” 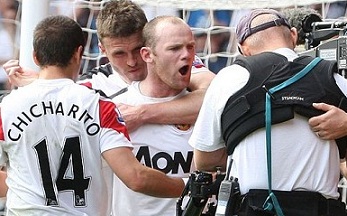 One report suggests the FA confirmed they would examine footage of the incident but was unclear as to what action they would take “We will look at it” a spokesman told PA Sport “we obviously don’t condone foul and abusive language.”

Rooney admitted that his impulsive rant was out of order saying that “I want to apologise for any offence that may have been caused by my goal celebration, especially to any parents or children that were watching. Emotions were running high and on reflection my heat of the moment reaction was inappropriate, it was not aimed at anyone in particular.”

To anyone who may be tempted to try and crucify Rooney for his indiscretion please ask yourself,  have you ever experienced a fraction of the pressure he’s been under at the age of 25? Perhaps more pertinently, can you even remember that far back?

Should the authorities punish Rooney his outburst?