While many fans can easily quote chapter and verse about the recent history of Manchester United, only a few old farts like myself are still around to remember the stalwarts who helped weave the rich tapestry of a club they helped develop into one of the world football’s giants. One of those men was Johnny Morris who passed away at the ripe old age of 87 earlier this week. He spent eight years at Old Trafford but like so many other greats at the time, most of those years were during the war years which robbed those players the full recognition they deserved. Ivor Ponting from The Independent paid tribute to a United great who should be remembered by those who have little or no memory of.

While many fans can easily quote chapter and verse about the recent history of Manchester United, only a few old farts like myself are still around to remember the stalwarts who helped weave the rich tapestry of a club they helped develop into one of the world football’s giants. One of those men was Johnny Morris who passed away at the ripe old age of 87 earlier this week. He spent eight years at Old Trafford but like so many other greats at the time, most of those years were during the war years which robbed those players the full recognition they deserved. Ivor Ponting from The Independent paid tribute to a United great who should be remembered by those who have little or no memory of. 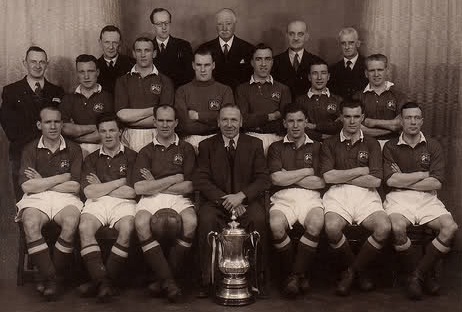 That lovely team, ever daring to attack so that it might entertain and win but never afraid to risk defeat, finished as Championship runners-up in the first three post-war seasons but applied enchanting balm to the fans’ serial frustrations by lifting the FA Cup in 1948 with a sublime exhibition of fluent  football.

At the time of that Wembley victory over a potent Blackpool combination illuminated exquisitely by Stanley Matthews, Morris was 24 and revealing comprehensive all-round ability. Soon, it seemed certain, he would ascend to parity with an exalted company of inside-men then adorning the English game, the likes of Raich Carter, Wilf Mannion, Len Shackleton and Morris’s clubmate, the endearingly modest Stan Pearson.

These were stars who bestrode the turf like sporting emperors, accustomed to dictating the course of the action which swirled around them, making goals and taking them with equal facility. Morris was the youngest of their number and by no means the least gifted. The accuracy of his passing, over long distances and short, was exceeded only by its astuteness; he was courageous, often way beyond the call of duty, tackling with a flinty ferocity which made much bigger opponents quail; he was a fine finisher with either foot, particularly his right; and he was unfailingly industrious, scampering to ever corner of the pitch from first whistle to last.

But even as he stood at the threshold of his prime and thrived at the heart of United’s burgeoning dominion, so there occurred a rift with Busby, outwardly so benign but an awesomely hard man when crossed. So in March 1949 a British record fee of £24,5000 was agreed with Derby County and, to the considerable chagrin of most United supporters, Morris was on his way to the Baseball Ground, where he would flourish enough to earn three England caps but without ever quite scaling the heady heights once predicted for him.

Johnny Morris had emerged with the MUJACs, the Old Trafford club’s former junior team, and while still in his teens he attracted widespread attention during a wartime spell on loan with Bolton Wanderers before turning professional with United in 1941. All too soon, his career impetus was interrupted by the war and he headed for Europe as a member of the Royal Armoured Corps’ tank regiment, being one of the first to cross the Rhine as the Allies closed in on victory.

When the conflict ended, Morris returned to Manchester, where instantly he captivated United’s new manager, Matt Busby, with his exceptional ability. By the autumn of 1946 he had graduated to the first team, with the adaptable Pearson switching from inside-right to inside-left to accommodate the precocious newcomer. The effect was invigorating as Morris forged a brilliant right-wing partnership with the veteran Scottish winger Jimmy Delaney and also linked sumptuously with Pearson, spearhead Jack Rowley and left-winger Charlie Mitten.

Many of United’s most irresistible attacks emanated from the stocky, curly-haired schemer, who was adept at timing his dispatches precisely so that his colleagues could rampage into space behind opposing defenders. Morris was in his element at Old Trafford, happy and fulfilled both professionally and socially, and there seemed no limit to what club and player might achieve together. However, an unexpected parting of the ways was imminent.

It was an era of post-war boom for the game, with the entertainment-starved masses flocking to fill the grounds, and with the coffers of the big clubs overflowing. Meanwhile the players were paid a comparative pittance by employers who operated the monstrously unjust retain-and-transfer system, which made footballers into virtual slaves, unable to move on even when their contracts had ended.

To the fiercely independent Morris this was anathema, and he wouldn’t accept it. Accordingly he stood up stridently for his rights at every opportunity and, having got nowhere with a succession of forthright requests for a benefit which he believed was owed to him, he asked for a transfer. He was met by a flat refusal by Busby, who told him: “While I am here you will never leave the club.” But Morris was as shrewd and combative off the field as he was on it, and he devised a wily strategy to escape from Old Trafford.

He was a magnificent all-round sportsman and recently he had demonstrated his golfing prowess by winning a tournament for United players and staff. Now he demanded his employment cards, declaring his intention of leaving football to make his living as a golfer. Had he carried out this ingenious threat – and he might just have done so – United would have lost a major talent without banking a penny and so, exceedingly reluctantly, they agreed his switch to Derby.

Eventually United won that elusive League title, in 1952, but most contemporary pundits assert that far more honours would have ended up at Old Trafford had Morris and Busby not clashed over a point of financial principle. With County, then in the top division, the spiky midfield general continued to play well, but he was no longer surrounded by such high-calibre colleagues as his old mates in Manchester and soon he receded from the international scene.

In 1952, still aged only 29, Morris joined Leicester City, with whom he experienced mixed fortunes, his two Second Division title medals of 1953-54 and 1956-57 punctuated by relegation in 1954-55. He left the League in 1958 to become player-manager of Corby Town, then filled a similar role for Kettering Town before laying aside his boots to guide Rugby Town, Great Harwood and Oswestry Town, work he combined with a job as a tyre salesman, plenty of time on the golf course and a full family life.

Away from the action, the effervescent Morris was an effortless spinner of yarns, as entertaining in the bar as he was on the field. He relished his time in football, adoring the cameraderie, especially at Old Trafford, and he understood perfectly that he might have achieved more had he compromised his beliefs and remained in Manchester in 1949.

But Johnny Morris was not one to harbour regrets. What might have been? It never bothered him in the slightest.