They sure don’t make them like Billy Foulkes anymore – although I must admit that current Manchester United skipper Nemanja Vidic comes from the same mould. The clubs official website says of the 60’s legend “In a distinguished career, Foulkes won First Division championship medals in 1956, 1957, 1965 and 1967 and was back at Wembley, this time a winner, in the 1963 FA Cup final. Add to that his part in the 1968 European Cup winning team and it’s somewhat surprising he was capped only once by England, against Northern Ireland in October 1954. Although noted more for stopping goals, Foulkes is fondly recalled for his goal against Real Madrid at the Bernabeu in 1968, which helped send Manchester United into their victorious European Cup final.

Only Sir Bobby Charlton and Ryan Giggs have played more games for Manchester United than Bill Foulkes, the granite bulwark of the Red Devils’ rearguard for 15 years and a key figure in the history of the club. He played at right-back for the original Busby Babes, helped to pioneer the path of British clubs in Europe and survived the Munich air disaster. 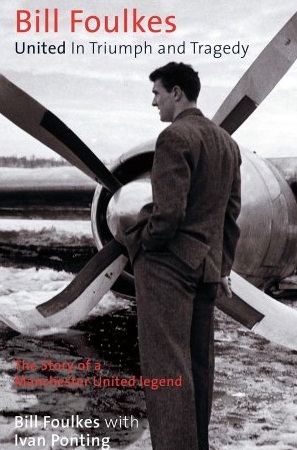 Then he switched to centre-half, becoming the defensive cornerstone of Matt Busby’s third and last great team, a sumptuous collection of talent which peaked with triumph in the 1968 European Cup. Along the way Bill garnered four League championships medals, was a central figure as the FA Cup was lifted in 1963 and terrorised the life out of the First Division’s finest attackers. But this is no mere tale of sporting success, inspirational and long lasting though that was.

Bill Foulkes was a hard man of the old school, about as far removed from the pampered, overpaid footballers of the 21st century as it is possible to imagine. He recounts how he made his full England debut while still working as a part-time coalminer, finishing his shift underground only the day before taking the field against Northern Ireland. His memory is packed with other tales, by turns uplifting, harrowing and funny.

For instance, he conned Matt Busby into picking him for his first senior game, and once went AWOL from the Army and travelled to matches in disguise to avoid the military police. Between these covers Bill gives candid assessments of the Old Trafford legends who shaped an era.

The great man himself, the future Sir Matt, his faithful but fiery lieutenant, Jimmy Murphy, the incomparable Duncan Edwards and the other boys who perished on that slushy German runway in 1958, the likes of Tommy Taylor, Roger Byrne and, Bill’s favourite, little Eddie Colman. Then there was that glorious trinity of Bobby Charlton, Denis Law and George Best and Bill’s rearguard cohort Nobby Stiles.

The list goes on and on. At the heart of  Foulkes’ tale in this 240 page hardback “United in Triumph and Tragedy” published in 2008 is the Munich catastrophe, which claimed 23 lives and left an indelible mark on the survivors – some physically, all mentally. Bill’s account of the accident, which he is honest enough admit did not make him a hero, is haunting and achingly poignant. Thirteen days after emerging from the twisted wreckage of United’s airliner, Bill led United into emotional FA Cup battle with Sheffield Wednesday, then captained the patchwork side all the way to Wembley.

That same indefatigable spirit rendered him indispensable as Busby rebuilt his shattered team and finally attained his own version of the holy grail – the European Cup – a decade later. It was the only fitting tribute to his fallen Babes, and Bill Foulkes was there every inch of the way. As befits Bill’s colossal stature in the game, contributors to this book include Old Trafford icons Sir Alex Ferguson, Sir Bobby Charlton together with England World Cup winners Nobby Stiles and Roger Hunt.