Manchester United sixties legend Paddy Crerand does not mince words. He had no hesitation is saying publicly what many fans have always known when he bluntly told Keys and Gray on Talk Sport that “There’s an agenda against Manchester United. It’s been going on for years and it’s not going to stop. There’s a great deal of jealously out there. It’s not acceptable to swear if you’re a Manchester United player” he said. Crerand went on to claim that Rooney wasn’t swearing at the camera during the outburst at Upton Park but was angry with the cameraman.

The Old Trafford veteran was also quick to point out that the media has been deafening in its silence over Spurs striker Peter Crouch’s swearing against Stoke on the weekend. “I’ve not seen a mention of it in the papers” he said “you ask anybody in England today if they’ve read anything about it in the press, has anybody on television mentioned it? I think that proves the case more than anything else about the situation with Wayne Rooney.” 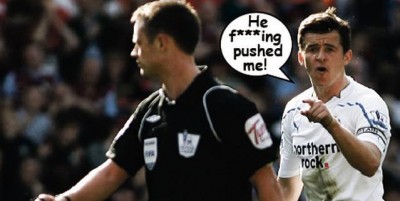 One newspaper that did was the Daily Mirror who hired expert lip readers to watch the weekend’s football on TV and reveal what the players were saying on screen. The investigation revealed that using four letter words during matches is, as Rooney’s former team mate Gary Neville admitted “part of football. If swearing is outlawed from the game and is a crime worthy of a two game ban, there will be nobody on the pitch.”

So here’s proof, if it was ever needed, of what Crerand is saying, courtesy of the the Mirror

48mins – Wolves boss Mick McCarthy spots one of his players moving out of position and shouts ‘f*****g stay there”.

73mins – Everton striker Jermaine Beckford is caught on camera saying “f*** me” while sitting on the bench after being substituted.

57 mins – Blackpool midfield ace Charlie Adam shouts “f*** off” at the referee after he was fouled.

Newcastle skipper Joey Barton told the ref, the opposition and even his own players to “f*** off”

Tottenham v Stoke – Spurs’ beanpole striker Peter Crouch shouts “f*** off” twice in joyful celebration after scoring his first of two goals in Spurs’ 3-2 win. Midfielder Matthew Etherington, for Stoke, complains to the ref “f*****g useless, f*****g useless” after he was fouled Etherington makes a bad tackle, is given a yellow card and tells the ref to “f*** off”

As Neville went on to say “Everyone accepts that it’s been part of football in the crowd and on the pitch for the last 100 years.” So what does the FA propose to do? Is it going to turn football into an R rated entertainment industry and ban anyone under the age of 18 from attending because of the profanities heard on the terraces?

What’s that you say Mr Bernstein? What…What…F*****g What?

Do you believe Crerand is right when he says that there’s an agenda against United?