So it turned out to be the old chestnut. Did Manchester United gain a point or did they lose two in the title chase? An answer may be provided in 24 hours when Arsenal face Spurs in what could be their last chance to stay in the race. The bottom line is that United surprisingly failed to find the net for a second successive game. Credit must go to Newcastle however for a spirited defensive performance which enabled them to hang on to their point despite facing a second half barrage.

As frustrating as Sir Alex Ferguson must have been to see a game which was there for the taking go begging, he must also know from long experience that an away point like this can prove to be vital at the end of the day. He will now be hoping for Spurs to deny Arsenal full points at White Hart Lane on Wednesday night 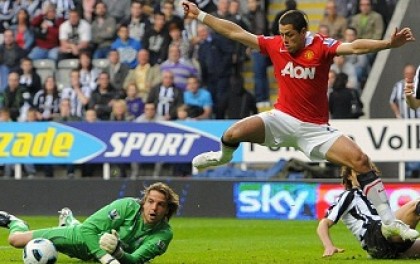 The Guardian – The Premier League leaders had to settle merely for inching nearer the title. Neither Manchester United nor their opponents had it in them to take a long and bold stride. In stoppage time Javier Hernández sought a penalty but was booked because the referee believed he had manufactured any contact with Danny Simpson. This draw with Newcastle United put the Old Trafford team seven points ahead of Arsenal, whose game in hand is against Tottenham Hotspur at White Hart Laneon Wednesday. The visitors to this ground would have known it was a time for gritted teeth more than incisive football.

A loss to Manchester City in the FA Cup semi-final could hardly be devastating for a side still intent on winning the Premier League and Champions League but the nature of the game at Wembley may have perturbed Sir Alex Ferguson more than the result itself. After half an hour City achieved a degree of control that was maintained until the end. Manchester United looked increasingly jaded. Full Report

The Northern Echo – Newcastle have conceded more goals to Manchester United than to any other club, but thanks to a resilient display at St James’ Park, the tally remains at 289. And thanks to the quality of the opposition, the Magpies’ ninth clean sheet of the season was easily the most impressive. With the entire Newcastle back four combining discipline with desire, Alan Pardew’s side edged another point towards safety. Seven points clear with five games remaining, it would take an incredible series of events to plunge them into trouble now.

It would also take a remarkable turnaround for Manchester United to be denied the Premier League title, but should Arsenal beat Tottenham tonight and also record a home win over the Red Devils on May 1, Sir Alex Ferguson’s side will hold just a one point advantage over their London rivals. Full Report

Manchester Evening News – Manchester United had to settle for a draw at Newcastle United to leave their quest for a 19th Premier League title in doubt.The Reds, who were knocked out of the FA Cup by Manchester City on Saturday, enjoyed the majority of possession at St James’ Park but could not break down the stubborn Magpies. United, who have now drawn nine away games this season, are seven points ahead of second placed Arsenal having played a game more.

Ryan Giggs, Javier Hernandez and the returning Wayne Rooney all had good chances, but none were converted. The days when Newcastle competed with United both on the pitch over 90 minutes and over the season seem a distant memory, and Sir Alex Ferguson’s men arrived on Tyneside having not lost a league game to the Magpies in 17 attempts dating back to September 2001. But Alan Pardew had promised that his team, who started the night still not assured of their place in next season’s top flight, would give United a game, and in the opening 45 minutes they certainly did that. Full Report