Hang on to your hats folks, Sir Alex Ferguson is forecasting more thrills and spills in the title race when United, Arsenal and Chelsea play out the final phase of the campaign. The great rivals all have four league games to play commencing this weekend. The Reds and Gunners go head to head on Sunday afternoon less than 24 hours after Chelsea host Tottenham, a team still with aspirations of their own in terms of the chase for a top four place. It’s a clash between two London rivals with plenty to play for in which anything can happen.

Ferguson told Adam Bostock on the manutd.com official website on Friday “I think there’s still drama ahead, the teams at the top will drop points, including Chelsea. And if we get to the last home game needing to win it to win the league, I’d be happy with that, even though Blackpool may be fighting against relegation and they’ll be really difficult opponents. We’d have taken that scenario at the start of the season. I think we’d take it now.” 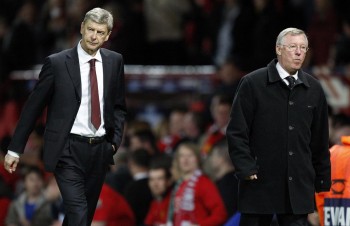 The boss would obviously like to have it all over and done with by then and it will be if United can win the next two games. “The slant I seemed to be getting from the media was that Arsenal and Chelsea were expecting to win these games and change the top of the league” Ferguson said somewhat surprisingly.

“My view is ‘Why can’t we win these matches?’ the form we’re in we can win the matches. It’s not going to be easy for Arsenal or Chelsea any easier than it is for us. These are difficult games but in the form we’re in we’ve got a good chance. If we get a point, it’s not the worst point away from home but we’re not going there looking for a point” he said.

Sunday’s game could have been an even more important affair had Arsenal not slipped nine points behind United by losing their last game 2-1 at Bolton. Sir Alex admitted “I have been a bit surprised by Arsenal’s slide. Chelsea were the dark horses in the sense that people seemed to think they were out of it. But I looked at their programme and I thought they had an easier run in. They’re now on our coat tails.”

I may be naive or wearing red tinted glasses but surely, a six point lead over the second placed reigning champions and nine over the Gunners does not exactly point to a photo finish – especially with a proven winning jockey like Sir Alex in the United saddle.

Are you expecting a tight finish to the title race?

5 thoughts on “Fasten your seatbelts ‘Drama ahead’ warns Fergie”