United defeat at Arsenal a blow – but not fatal

A point from Arsenal today then another from Chelsea and Blackburn, together with three from Blackpool in the final game would have left United on 79 points with Chelsea on 77. The 0-1 defeat at the Emirates now means that the same set of results will give United 78 points, still one ahead of Chelsea. Either way, the key has always been to avoid defeat next Sunday – and nothing has changed.

Nothing ever seems to change for Manchester United. If there’s a difficult way to do something you can rest assured they will find it. From an apparent comfortable position at the top of the table, United now find themselves with just a defeat by Chelsea at Old Trafford next Sunday from seeing their title hopes melt away. Was it a hugely disappointing setback? Most certainly. Was it a fatal one? Far from it because very little has changed when you consider the big picture.

Sound strange? Let me explain why. A point from Arsenal today then another from Chelsea and Blackburn, together with three from Blackpool in the final game would have left United on 79 points with Chelsea on 77. The 0-1 defeat at the Emirates now means that the same set of results will give United 78 points, still one ahead of Chelsea. Either way, the key has always been to avoid defeat next Sunday – and nothing has changed. The bottom line is that it means very little by what margin the race is won by, what matters is for the title to return home to Old Trafford for a record 19 times. 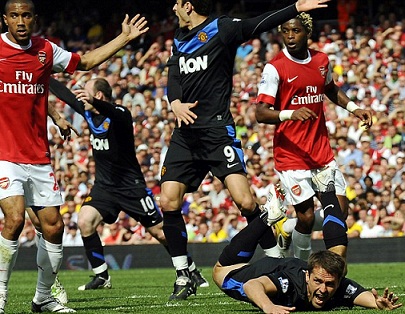 The Telegraph – Arsenal have blown the Premier League title race wide open after finally finding the character of champions to beat leaders Manchester United 1-0 at the Emirates Stadium. Aaron Ramsey’s second half goal – his first in the Premier League since Jan 2010 – saw United’s lead remain at just three points from Chelsea, whom they face next week at Old Trafford.

The Gunners may have seen their own title ambitions extinguished following a run of costly draws before defeat at Bolton last Sunday, but at least gave their frustrated fans renewed hope next season might just be different for Arsene Wenger’s young side. Ramsey had only been in the team because of a thigh injury to captain Cesc Fabregas, but his well-taken strike on 56 minutes was just rewards for a high-tempo performance and meant the officials’ miss of a penalty for handball by United skipper Nemanja Vidic in the first half did not eventually prove decisive Full Report

BBC Sport – Arsenal blew the Premier League title race wide open as leaders Manchester United were deservedly beaten at The Emirates Stadium. Aaron Ramsey’s winner early in the second half condemned United to defeat and leaves them only three points ahead of Chelsea with identical goal difference – and a meeting between the two to come at Old Trafford next Sunday.

Forced to rebuild his promising career after suffering a broken leg, Ramsey made the most of a chance to deputise for injured captain Cesc Fabregas with a goal that will have been met with almost as much joy at Stamford Bridge as it was in front of Arsenal’s fans. Victory was well earned reward for the their superiority against a United side that never looked like repeating the heroics of their Champions League semi-final first leg victory against Schalke 04 on Tuesday in Germany Full Report

Manutd.com – United slipped to a 1-0 defeat at Arsenal setting up a virtual title decider with Chelsea next Sunday at Old Trafford. Aaron Ramsey, who chose to join the North Londoners ahead of the Reds, scored the only goal of the game to inflict a fourth defeat of the Barclays Premier League campaign on the leaders. Substitute Michael Owen was denied a late penalty when being brought down inside the box with a couple of minutes remaining after Nemanja Vidic appeared to escape conceding a spot kick for a handball in the first half.

But the Reds were not at their best and rarely replicated the sort of form displayed against Schalke in midweek. Sir Alex Ferguson opted for Fabio at right-back and Nani in preference to Antonio Valencia with Anderson drafted into the midfield while the Gunners were without Cesc Fabregas, who injured a thigh in training Full Report

One final thought. All four Champions League semi finalists who played mid week and will do so again this coming one all lost on the weekend, including shock defeats of Barcelona and Real Madrid against mid table opposition. Interesting!