Ticket Prices – The Only Way Is Up

And so news has emerged that, as of next season, season ticket prices at Man United will be increasing by £1 a game, with the rationale behind this decision being attributed to the rise in VAT earlier in the year from 17.5% to 20%. On the other side of the coin though, the Glazer’s (or someone at United who is employed by the Glazer’s) have listened to suggestions from fans by capping junior ticket prices at £20.

To be honest, it could have been worse. Considering that, over the last six years, ticket prices have increased by an average of 5.8% P/A, ‘tis but a drop in the ocean. But let’s not get lulled into a false sense of security here because, as evidenced by the ticket prices for the Champions League final, the common fan is still being treated with complete and utter contempt by those running the clubs and authorities within football. 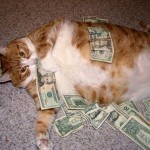 And so news has emerged that, as of next season, season ticket prices at Man United will be increasing by £1 a game, with the rationale behind this decision being attributed to the rise in VAT earlier in the year from 17.5% to 20%. On the other side of the coin though, the Glazer’s (or someone at United who is employed by the Glazer’s) have listened to suggestions from fans by capping junior ticket prices at £20.

To be honest, it could have been worse. Considering that, over the last six years, ticket prices have increased by an average of 5.8% P/A, ‘tis but a drop in the ocean. But let’s not get lulled into a false sense of security here because, as evidenced by the ticket prices for the Champions League final, the common fan is still being treated with complete and utter contempt by those running the clubs and authorities within football.I went onto the United website just before to check how much a ticket for the CL final may set me back, and it was pretty disgusting reading. There are four bands, with the prices being £300, £225, £150 and £80 respectively. When you compare this to the £60, £50, £40 and £30 price bands for the recent FA Cup semi-final against the Bitters, it well and truly boggles the mind.

So why are they doing this? Why has football become so utterly unaffordable for the working-class fan (and don’t tell me that contemporary prices are affordable for most people, not everyone is like Jenny and Tarquin down the road). As with most things in life, it’s the incentives involved that are driving this policy.

The primary incentive in this little scenario is success. Football clubs want to please their fans, they do this by winning trophies, and they need money to do this. You can’t win trophies, especially nowadays, unless you can splash the cash on some new players and pay them the top dollar to match. The most significant revenue stream for football clubs is match day income, and obviously most of this is made up from the revenue directly received from selling tickets. So the higher your prices are, the more money you’ll get, the more you’ll be able to spend on transfers and, unless you have an absolute numpty of a manager, the more trophies you should win (unless some of your rivals have a lot more income or cash available).

But where does this stop? At what point do fans think, “You know what, I’m loving all these trophies, but I really can’t afford to fund this anymore.” I’d assume that it takes quite a while until they reach this point. It’s what economists call price elasticity of demand. If, for example, petrol prices increase by 10%, your consumption still probably won’t change much, it may perhaps fall by 1%, but the fall in demand is a lot smaller than the rise in price. Here, demand is said to be price inelastic. With other goods, such as luxuries like fillet steak, a rise in price of 10% might lead to you consuming 20% less fillet steak because there are other, cheaper alternatives that do a similar job (T-bone). Here, demand is price elastic.

And so I think we can all deduce that the reason that demand for football tickets is price inelastic is because sports fans have unparalleled brand loyalty, a loyalty akin to love that causes us to experience euphoria and devastation of the highest order based on our teams success on the pitch. Some people can’t understand it; I think they’re just nobs.

And so with each round of ticket price increases, many people will simply utter the phrase “supply and demand”, indicating that such price rises are just, fair and inevitable. If left to their own devices then yes, the price rises are inevitable, the market will eventually get to an equilibrium point where supply equals demand, because as the likes of Stefan Szymanski like to point out, a queue for tickets once they’re all sold out indicates lost revenue for a club. But is this fair? Because what clubs are essentially doing is taking advantage of and cashing in on a football fans loyalty to their club. Left to its own devices, as we are seeing now, this will simply continue to escalate to a level where the common fan, the type that are supposed to be the heart and soul of the club, are simply left to hang out to dry. When faced with a choice between ensuring tickets are affordable for working-class fans or squeezing every penny, the penny squeezers have come out on top. The lust for success, as mentioned above, and the lust for greed, as mentioned below, ensure that this is the case.

But why can’t someone buck this trend? Well, imagine you’re the chairman of a football club, and you’re the altruistic sort of bloke. You see the explanation above and think, you know what, screw revenue maximisation; I’m going to keep ticket prices below their equilibrium level to ensure that they’re affordable to those lower down the income distribution who, on average, probably love the club, and football, more than anyone. I’d take my hat off to you, but unfortunately, you won’t have as much chance of winning trophies anymore, because your less altruistic rivals will be earning more than you and, as a result, buying the better players and winning more points and trophies. Oh, and they’ll be qualifying for the Champions League. £££.

So what to do? Well, it’s pretty obvious that in order to stop ticket prices getting as high as a hippy in a big field which has some shit band like The Killers playing in the middle of it, some sort of regulation or intervention, on a large-scale, is required.

You can’t take away the clubs incentive to spend money, even in the panacea of a club run by fans, they’re still gonna want to spunk money up the wall trying to buy all the top players to ensure that they win the Champions League one day. You also can’t stop how much clubs can spend either because, as history has shown, any sort of transfer limit or salary cap in football has been violated by sneaky clubs all over the world. And the Financial Fair Play regulation that is coming in, whilst it’s going to stop clubs spending themselves to bankruptcy, it’s not going to stop them from charging higher ticket prices. Hell, if anything, they’ll need to charge more, because they won’t be able to do a Chelsea/City anymore in order to fund their quest for success.

So you can’t stop them spending money (that they have), you can’t stop them wanting to spend money, you’ve therefore got to stop them being able to get that money (from fans) in the first place. So therefore, why not do as they do in Germany, a certain percentage of the total tickets are limited to a certain price, which may either be an absolute price (such as £20) or a percentage of the highest priced ticket. Apply this across the board to all clubs (so that the altruistic chairman mentioned above doesn’t get screwed), and you’ve got a way of ensuring that there will always be tickets affordable for working-class fans.

Now there are other incentives at work here as well. With United, the Glazer’s obviously have the debt incentive, in that they need to get as much money in as possible to pay off that debt and the £45m in interest costs we’re incurring each year from the bond issue. If we weren’t having to pay those interest payments, we wouldn’t have to screw our fans over so much.

Then, as always, there’s the greed factor to consider. Why are UEFA charging those exorbitant prices? Easy, it’s because those prices are going to make lots of men who wear suits to football matches very rich. I don’t know about you, but if I ran a football club or one of the governing bodies, I’d give myself a decent enough salary, but I wouldn’t increase ticket prices just so that I can take shit loads of money from fans pockets and put it into my own (I guess you’ll have to take my word for that). This, I believe, is where fan ownership is necessary. Like a Trade Union, they need to ensure that the bourgeoisie at the top don’t absolutely bend fans over a barrel and spank them raw like they are doing.

Now I’m sure there are a couple of holes in my argument. Any criticism or analysis that goes beyond my basic grasp of economics would be most welcome. One flaw that I can see is what the effect might be on making smaller clubs, that don’t sell out, charge less for their tickets. Many are struggling enough as it is, the last thing they need is a cut in their revenue streams.

Well first of all, many smaller clubs charge very low prices as it is, a minimum level could also be set so that clubs who charge below a certain amount already don’t fall within the rule. The other solution is, of course, greater distribution of the TV and commercial revenue that those at the top receive. The bigger clubs may see a fall in match day revenue as a result of the above proposal (or they may not if they offset the loss by charging more for the corporate/hospitality seats), but resulting TV and corporate revenue can easily offset this further, because when you consider how untapped the world market is in these areas, this is easily attainable.

And there’s also the issue of competitive balance as well. Whilst I don’t think that as high a level of competitive balance as possible is what we should always be aiming for, I also don’t think that the current situation is fair. The same 5-6 teams competing for the CL and Premiership each year? It’s all very well for us Man United fans, but in decades gone by fans of clubs from all over the country had a realistic chance of winning the league. Now, they’ve got as much chance of winning the league as the FA do of winning my respect.

Written by Editor
Stepney sees home form as the key ‘Just like ’68’
Media Watch May 5: Final may be 1968 revisited