When Manchester United secured its place in the European Champions League Final at Wembley on Wednesday night, it brought the memories flooding back for former United goalkeeper Alex Stepney. He was instrumental in the Cup coming to England for the first time back  in 1968 when he made a desperate late save from Benfica’s Eusebio to send the 1-1 stalemate into extra time before Wembley exploded in wild celebrations as United ran out 4-1 winners. And he sees similarities between that victory and this weekends title decider against Chelsea.

“In 1968, we did not exactly march towards Wembley by dazzling people with our football” he admitted “it was a knockout competition right from the first stage so the stakes were tremendously high. There was this mindset among us whereby we knew that if we drew away from home, then we were confident we could do the job at Old Trafford. And if you failed to win at Old Trafford then you probably didn’t deserve to go through.” 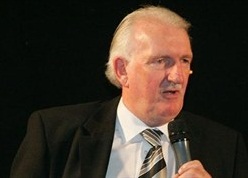 “We drew 0-0 away in Malta in the first round” remembers Stepney “we then drew 0-0 in Sarajevo, lost in Poland against Gornik Zabrze and then we drew against Real Madrid in the semi-final. It was our home form that got us through, and in that respect you can draw similarities with the current side and the 1968 team.”

Stepney, who was at Chelsea before making a surprise move to Old Trafford nearly half a century ago, believes home advantage could be crucial for United in Sunday’s huge encounter with Chelsea. Apart from a 2-2 draw with West Brom, United have been flawless in the league at home this season and notably defeated Carlo Ancelotti’s side home and away in the Champions League.

“Old Trafford’s been a real fortress and it’s really helped us this season” Stepney told ManUtd.com. “We are where we are – on top of the league – because of our home form.” Stepney believes all the pressure is on Chelsea going into the crunch clash, especially with United’s spirits high after the 4-1 demolition of Schalke to clinch a Champions League final date with Barcelona.

“Nothing but a win will be good enough for Chelsea on Sunday” he stated “even then, they still have to play Newcastle at home and Everton away. They won’t be easy games. As for United, a win would be fantastic but even a draw would be a good result. The pressure is definitely on Chelsea.”

Should the opinions of  United legends like Stepney really count for anything?