It’s a well known fact that anyone who has ever donned the famous red shirt of Manchester United is revered by fans long after they leave Old Trafford. Someone who was part of the first ever Busby Babes that was part of transforming the club into the world giant it is today, is even more so – which is why the passing of 76 year old Eddie Lewis in South Africa last week is mourned by the United family. He may not have been the best known member of the Babes but he was certainly one of the very first.

It’s a well known fact that anyone who has ever donned the famous red shirt of Manchester United is revered by fans long after they leave Old Trafford. Someone who was part of the first ever Busby Babes that was part of transforming the club into the world giant it is today, is even more so – which is why the passing of 76 year old Eddie Lewis in South Africa last week is mourned by the United family. He may not have been the best known member of the Babes but he was certainly one of the very first.

Lewis who played 24 times for United between 1952 and 1955, died in Johannesburg after a long battle with cancer. His memorial service was held in his adopted city. Only last week Sir Alex Ferguson and Sir Bobby Charlton called Lewis to wish him a speedy recovery. He was a Manchester lad who played for Manchester Boys in 1948 alongside future United star Dennis Viollet. 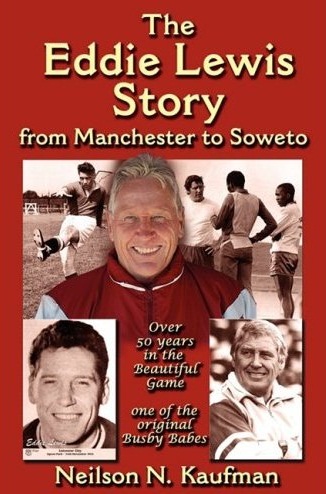 “Eddie was a bubbly character and an astute, clever forward who was destined to make it as a footballer” recalls Eric Mallender, a Manchester City scout who was a team-mate at Manchester Boys.

Lewis featured in United’s first FA Youth Cup winning side of 1953.  By that time he’d already been promoted to the first team and enjoyed a dream start in November 1952, aged just 17. He scored seven minutes into his debut at West Brom although three Albion goals in the second half spoiled the day a little. But Lewis went on to score nine goals in 11 games in his first season.

The arrival of Tommy Taylor from Barnsley limited his first-team chances and with competition from Charlton, Viollet and Liam Whlean, Lewis joined Preston for £10,000 in December 1955. He stayed at Deepdale for less than a year before moving to West Ham, scoring 15 goals in 36 appearances to help the Hammers win promotion to Division One.

He then moved to Leyton Orient, where he enjoyed a six-year spell where he switched to full-back and helped them reach the First Division for the first time in 1962. He later played and managed in non-League football.

Emigrating to South Africa in 1970, he sold insurance before enjoying a successful coaching career with Kaizer Chiefs, Moroka Swallows, Wits University, Highlands Park and others. “He was my coach at Wits and responsible for me getting into professional football” said former Reds keeper Gary Bailey.

“He was delighted that it was at Manchester United because he never stopped talking about United. He always told me that his greatest moments in football were playing with the Busby Babes and it hurt him badly when he left for Preston. He then had his heart broken when he lost many of his friends in the Munich air disaster.”

Bailey worked with Lewis in TV, where he had a reputation for forthright opinions delivered in a pronounced Mancunian accent. “Eddie became an important figure in the history of South African football as a coach, and at a challenging time” said Ian Hawkey, author of Feet Of The Chameleon: The History Of African Football.

“He was popular with fans of all colours and did his bit to break down barriers imposed on the sport by Apartheid by committing himself to football in the townships in the 1970s.” Ignoring Apartheid laws, Lewis coached a white team – Wits and a black team – Chiefs.

“We trained next to each other and he’d take one session after another” recalls Bailey. “The police didn’t like a white man coaching a black team and came to have a word. We thought Eddie would get in trouble, but he was very firm as he told the police officer “I’m a football man, not a political man. I see footballers, not the colour of their skin’.”

A 300 page biography by Neilson Kaufman published by Derwent Press in 2008 titled ‘Eddie Lewis – from Manchester to Soweto’ tells his remarkable story. As a young boy growing up in a small suburb of Manchester, Lewis always had a dream of one day playing football for the great Manchester United. In November 1949, his dream came true when he joined the club and later become one of the original Busby Babes and a member of the team which won the first FA Youth Cup. Three years later he scored on his Football League debut.

In subsequent years Eddie went onto play with many of the great United players like Bobby Charlton, Duncan Edwards, Roger Byrne and many others, a number of whom sadly lost their lives in the Munich air crash of February 1958, but are never to be forgotten. Later in his playing career he was part of two promotion campaigns to the First Division, what is today known as the Premier League with West Ham United and Leyton Orient.

In March 1970, he and his family moved to South Africa. There, Eddie coached many of the top teams including Wits in Johannesburg, the Soweto based Kaizer Chiefs and Moroka Swallows – all to great success. Today, he is still considered as one of the great tacticians of the modern game.

In September 2007, he was honoured as one of just fifty recipients to receive an award for his excellent contribution to South African football from both the Confederation of African Football-CAF and the South African Football Association-SAFA, an award presented to him by the Premier of the Western Cape, Mr. Ebrahim Rasool.

More former Busby Babes will be lost as the years roll on. What can certainly be assured is that every one of them will forever be remembered.

To a Busby Babe – Rest In Peace